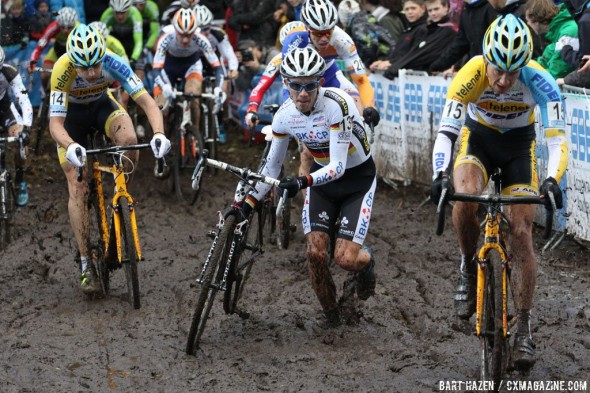 Philipp Walsleben is getting used to running through the crowds this season. Homme Zogge 2013. © Bart Hazen / Cyclocross Magazine German Philipp Walsleben, our Issue 6 cover boy, is the current German Cyclocross Champion and the 2009 U23 Cyclocross World Champion. He is a professional cyclocrosser at BKCP-Powerplus along with Niels Albert and is riding extremely well this year with numerous podiums and a close final in Gavere against World Champ Sven Nys.

Walsleben spoke with Christopher Langer from the CROSSMASTERS Cyclocross Team a week ago, and we have an English version of the interview for you today.

CROSSMASTERS: Congratulations for your second place in Gavere last weekend—it was quite a finale against Nys! What happened with your gears? Did it cost you the win? Are you happy or frustrated?
WALSEBEN: Above all, I’m happy—but some frustration remains. Just before the last hill, I didn’t reduce power to the crank enough when I shifted to the smaller chainring. Chainsuck was the result. That wasn’t so great. But of course, being able to fight a final like that was a great experience. And to be beaten by Sven Nys is something that has happened to just about everyone at some time or another.

You were on the podium several times this year—in Gavere, and before that in Hamme-Zogge and Tabor. What’s different this year? Different preparation? Other goals?
Not that much is different, to be honest. I just have a good feeling, ever since the beginning of the road season. Since last year’s World Championships, I enter my races more relaxed and with more self-confidence. Preparation was about the same as in past years. But what has changed is that I have been working with my trainer for almost two years now. After a short period of getting used to one another, the fruits of our labor are now showing.

About your trainer: Who is he and how do you work together?
Paul Ponnet. We have been working together since December 2011. He’s been a team trainer since April 2013. Now he has more time and is being paid by the team.

Does he write your training plans?
Of course he writes plans, but they’re particularly non-specific. I probably couldn’t really work with them alone. The advantage is, above all, that there’s a clear direction for my training—and I believe in it. So I don’t have to think about it any more, and training is much easier mentally. In addition, I do a highly detailed evaluation of the races with him. Physiologically, as well as tactically.

Before the Koppenbergcross, Nys and Aernouts both named you as the favorite. Did you hear about that? If so, did it help or was it stressful? And if you didn’t hear about it then, what do say about it now? Psychological games before a race?
The interviewer told me that Aernouts had bet on me as the favorite. Earlier, stuff like that would have made me nervous. Now I can ride my race independently of that. Neither negative nor positive comments have much influence. In the past I took the sport too seriously sometimes. Now I try to have fun; then stuff like that doesn’t bother me at all.

I don’t know if they were psychological games. In Nys’ case, that can apparently happen on occasion. But if he’s trying to put me under pressure, then that’s nothing but a compliment.

In the past, I often had the impression that you worked for Niels Albert a lot. Describe your relationship with him, and also how you discuss race tactics or make decisions during a race. Has anything changed? The team has slimmed down a bit now that Marcel Meisen and Simunek have left…
First of all, it’s mentally easier—as you can see, that plays an important role for me—to work for someone else. That why that happens pretty quickly in my case. I train here almost every day with Niels [Albert], so I know him pretty well. We have never had a tactical discussion up until the present day. The roles are actually clearly assigned. He was the one who could win races. That’s why I tended to ride for him. In my most recent races, I have been taking more care of yours truly.

And as far as tactics are concerned, in ’cross there’s not much you can do. That’s why Meisen and Simunek don’t play much of a role in the races—even though having Marcel in the team was really good.

Do you work with a mental trainer or a sports psychologist? Do you use techniques such as visualizing? How do you concentrate before the start?
Yes, I have a mental coach. He’s given me a few useful tips. I don’t visualize consciously, but I have learned to stop negative visualization. That used to happen a lot. I don’t concentrate before a race—I need distractions so that I don’t think about the race too much.

Next post A Look Back in Photos: Superprestige Gieten