NACT Offers 2010 Calendar and a Sneak Peek at Features

Looking ahead to its third season, the North American Cyclocross Trophy announces some exciting additions for the 2010 cyclocross season. With a schedule that includes some of the largest metro markets in the US, the series is poised to ride the wave of popularity ’cross is enjoying.

Created in 2008, the NACT series is comprised of “the classic cyclocross races” across North America, showcasing the best ’cross courses and attracting internationally ranked competitors. The overall series winnings combined with daily prizes make it the richest cyclocross series in North America.

Key among the changes for the 2010 season will be an equal prize list for Men and Women. “This has been a goal of the NACT series since year one, so this is very exciting to announce,” commented Myles Romanow, race director of the Whitmore’s Landscape Super Cross Cup and NACT founder.

Also new for 2010 is rider travel support for the top three riders each race weekend. In the words of Starcrossed race director Terry Buchanan, “We want to recognize the effort and expense top competitors face in racing the series, so this is a small step in that direction.”

Joining forces with the NACT this season will be Bob’s Red Mill. The company will provide whole grain goodness to racers and spectators each day as well as sponsorship of the Whole Grain Gauntlet course feature at each race. Bob’s Red Mill is a Portland-based whole grain food producer of more than 300 products, including a full line of certified gluten free products and an extensive line of certified organic products. “After we got hooked on the thrill of cyclocross a few years ago, it dawned on us what a perfect fit our hot Steel Cut Oats are for the sport,” says Matthew Cox, Marketing Director at Bob’s Red Mill. “Whole grains are the ideal fuel for the intensity of the sport, and the fans and spectators alike get cold and hungry. We’re absolutely thrilled to partner with the NACT series.”

Chris Grealish from The Victory Circle Graphix Boulder Cup quipped, ”We all left last week’s NACT Promoters’ Conference Call with great enthusiasm for creating unique and fun features at our individual events for the Bob’s Red Mill Whole Grain Gauntlet. I just hope nobody throws down six inches of oatmeal for the riders to pass through.”

Other NACT sponsors include Castelli US, sponsors of the NACT leaders’ jerseys, and BikeReg.com, providing series online registration. NACT Series Director Brook Watts stated, “We’ve taken a major step forward in 2010 with the help of some great new series sponsors and the hard work of the race directors. We’ve got a few more developments that we’ll be announcing in the next few weeks.” 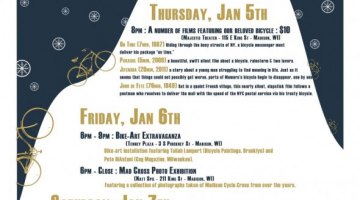