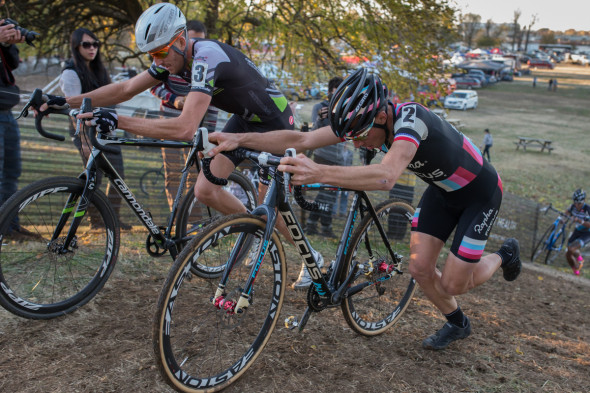 Ryan Trebon and Jeremy Powers fought for the lead for the entire final lap on Saturday. © Wil Matthews

Continuing with her great form this season, Katie Compton (Trek Cyclocross Collective) dominated both days of racing in the Elite Women’s field, separating herself early and holding on for the wins. Not far behind the battle raged on both days with great performances from the Elite Women including that of Elle Anderson (Cal Giant Berry Farm), who is having a breakout year.

The Elite Men’s racing was no less dramatic with Ryan Trebon (Cannondale/CyclocrossWorld.com) and Jeremy Powers (Rapha FOCUS) each taking home victories. Both days saw last minute changes at the front with attacks from the front group one after another on Saturday and a come-from-behind move by Powers coupled with nothing less than a crash in the 11th hour by Trebon on Sunday.

What better way to get a sense of the action than with our photo gallery from  the weekend’s events but for more in-depth race coverage check out the reports from both Saturday and Sunday.

Next post Behind THE Barriers Presents the Mudfund Derby City Cup