Maghalie Rochette (Luna Pro Team) and Jeremy Durrin (Neon Velo Cycling Team) both took sweet revenge  with Elite wins at the Manitoba Grand Prix of Cyclocross, the UCI C2 contest which for two years has run the day after the Canadian National ‘Cross Championships in Winnipeg, Manitoba. The two events share the same course and are part of a three day festival, the Shimano Canadian Cyclocross Championships p/b Volvo.

Rochette and Durrin both took solo victories. The Luna Pro Team rider overturned two years of disappointing ‘Cross National Title Race results with an aggressive ride that also netted her first UCI cyclocross victory. Durrin’s display of strength marked a dramatic contrast with last year’s outing in the same event when, while in the lead, he flatted and endured a long run to pit.

Both elite fields started in dry conditions on a 3.2 kilometer course that featured 70 meters of sand pits, back-to-back steep run-ups consisting of riverbank hill and one side of a fly over, and a lumpy section littered with grassy off-camber corners. The entire circuit threaded through The Forks marketplace and park downtown and over gravel, dirt, cobblestones, wood, pavement, grass and sand. Rochette lined up for the Manitoba GP start after coming in fifth in the prior day’s Elite National Cyclocross championship event. She got off to a slower than usual start, trailing a number of riders behind Natasha Elliott (Red Truck – Garneau p/b Easton Cyclocross Team) who led the field into the first corners. Saturday’s third place finisher in the championship race, Leah Kirchmann (Optum Pro Cycling p/b Kelly Benefit Strategies), did not start.

Halfway into the first lap the new elite champion Mical Dyck (Naked Factory Racing) opened a gap of about ten seconds. Meredith Miller (Noosa Professional Cyclocross Team) fought for her slipstream. Rochette was closing in and during the second lap replaced Miller as second wheel. Next on course were Gabby Durrin (Neon Velo Cycling Team) and 16 year-old Ruby West (Centurion Next Wave).

In the third lap Rochette caught Dyck and subsequently moved into the lead when the Naked Factory Racing rider washed out on a corner.

“I think she would have got me regardless, but I was trying to hold on as long as I could,” Dyck later said about Rochette getting away. “I was barely keeping up to her on the flats. She was on a mission today.”

Dyck and Miller held steady in second and third position, separated by about 15 seconds, while local Anna Schappert (Dark Red Racing) bridged up to Durrin and West. West took a turn at the front of her group of three. The effort cost her and she lost some ground.

As the race wound down Rochette stretched out her lead. She won by 28 seconds over Dyck. Miller finished third, Durrin fourth, and Schappert fifth.

West, who has been competing in ‘cross for three years and only this year jumped into elite racing, fared best among the U23 riders and pulled down seventh place, her highest finish to date in elite racing. Also 16 years-old, Maggie Coles-Lyster (Local Ride Racing) came in eighth.

Rochette had no explanation for the reversal of fortune that took place between yesterday’s average performance and today’s demonstration of force.

“I wasn’t expecting that at all. I really didn’t feel super good yesterday so I was hoping for the best today but I was really coming in hoping to have fun and practice racing, I guess,” Rochette said. “I felt stronger and stronger every lap so I took advantage of that. At some point I heard that Mical [Dyck] crashed and I just went a little faster and that’s how I got the gap. I was really focusing on riding well technically and it just helped because I didn’t make any mistakes.”

Durrin explodes men’s race and fends off a hungry Kabush 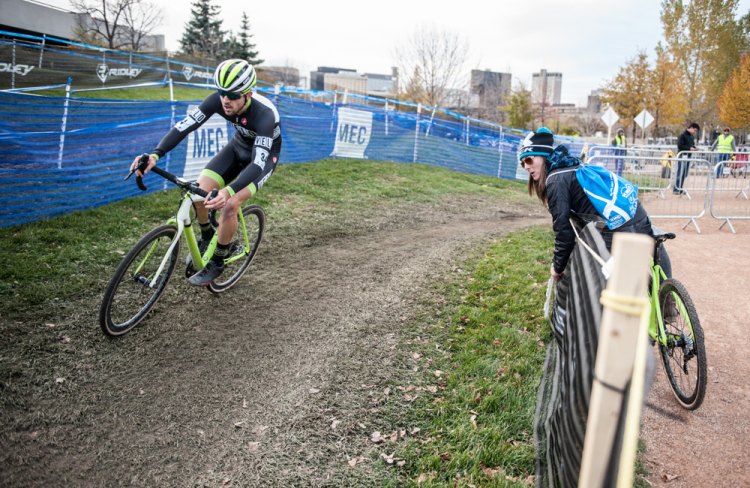 Early on a large chase group pursued the five leaders; within a few laps it thinned down to Aaron Schooler (Focus CX Team), Derek Zandstra (SCOTT-3 Rox), and Mark McConnell (Hot Sauce Cycling). Danick Vandale, a U23 rider with Russ Hays/Accent Inns who calls Winnipeg home, got a fast start as third wheel into the first corner, but faded a bit and factored into a second chase group which contained 2014 champion Mike Garrigan (Van Dessel/Shimano/Velocolour). Jonathan Page fell to the back of the action after his derailleur snapped off.

About mid-race Durrin struck out on his own by slipping in front of van den Ham going into the first of three stretches of sand. He said good lines hadn’t formed yet, and he wanted to pick his own way through. “I hit it hard going in, got a perfectly clean line on each sand pit, and got a five to six second gap and just went for it. It was very early though so I was a little nervous,” Durrin said.

Sensing danger and seeking some redemption from Saturday’s runner-up result in the nationals race, Kabush dug in and drove the chase after Durrin.

“Man, Durrin had some horsepower and opened up a good gap and I had to chase hard,” Kabush said. He towed van den Ham, Krughoff, and Gagné for a couple of laps and finally dropped them with three laps to go. Gagné lapsed back to the first chase group, teeing up van den Ham and Krughoff for a battle for third place.

“I’d say I have more power than a lot of guys and I just don’t have good technical ability, but today I had the technical ability dialed in, so I was able to keep a good gap,” Durrin said post-race. “Kabush is no joke and I was nervous for him. He is always a good late racer and I’m more of an early racer so I thought it could be tough towards the end, but I just kept it smooth and it was good.”

As Kabush labored to reach Durrin in the eighth and final lap, Krughoff came around van den Ham and Zandstra moved up as well, into fourth on course. While Kabush nibbled away a bit of Durrin’s gap he couldn’t close it and the Neon Velo man won with a margin of 17 seconds. Krughoff held off Zandstra to grab the last spot of the podium, a consolation prize as he had aimed for the win.

While Kabush had to settle with second, he was satisfied with his performance.

“Certainly I had some frustration after yesterday’s tactical race so it was great to have the Americans Durrin and Krughoff. They had the horsepower and made the race hard from the start and that’s kind of what I was hoping for,” Kabush later said. “I wasn’t quite snappy enough to close the 15 or 20 seconds that Durrin had, but I’m happy with second today, happy to be able to push hard and show I had the legs after yesterday’s finale.”

In an effort to avoid last year’s nightmare 10 minute jog to the pit, Durrin said he managed a combination of aggressive but cautious racing and avoided sections with puncture potential.

Durrin said the Manitoba GP result was his first UCI win in two years. It was a milestone, the deepest field he’s ever bested for a victory.

Among the U23 riders, fast-starter Vandale finished the highest in 16th place. He lost several positions when he flatted with two laps to go, rode as long as he could, and eventually ran a few hundred meters to make a bike change.

Quinton Disera (CSAJCC p/b Norco & LG) went two for two on the weekend by taking the Junior Men’s win at the Manitoba Grand Prix in the maple leaf jersey he earned on Saturday. At the head of the field in lap one, he narrowly missed a pile-up behind him, gained a lead, and crossed the line solo for the win. This year’s Canadian championship is the 16 year-old’s first national title in cyclocross. The Manitoba GP is not a UCI competition for the Junior Men.

Tired from his title bout the day before, Disera initially treated the Manitoba GP as an opportunity for a fun ride. His attitude changed during line-up. “Off the start, the whole feeling of wanting to feel pain came right back and I just took it from there,” Disera said.

Winnipeg rider Ollie Evans (Russ Hays/Accent Inns) doubled up on back luck today. The lap one crash delayed him and then a dropped chain spoiled his chances for second. Evans finished third behind second place rider Gunnar Holmgren (Centurion Next Wave).

“I was super nervous,” Evans said about the weekend’s competition. “I’ve never experienced having to defend a jersey. I let the nerves get to me I guess, and was making stupid mistakes.” Elite women take off down the pavement before heading onto grass. © Thomas Fricke