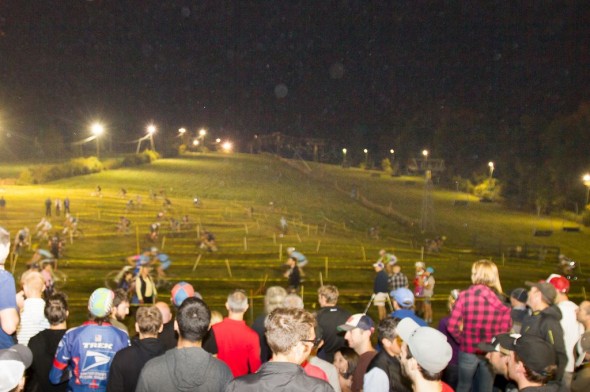 The packed beer garden was the optimal vantage point for witnessing others’ suffering on a ski hill tape maze. © Todd Prekaski

SKI WARD SKI AREA, SHREWSBURY, MA – The Holy Week of Cyclocross rolled forward Wednesday night with The Night Weasels Cometh, the most serious “fun night race” this side of StarCrossed. Fans were treating to an eclectic mix of pro riders hunting for midweek training and easy money, aggressive and enthusiastic junior racers, and masters racers up past their bedtime, on the traditionally difficult course the race has become famous for.

New this year was the fastest man in cyclocross, Jeremy Powers, attending the event – not as a racer, but as a celebrity DJ adding to his Louisville 2013 Foam Party palmares. Miller and Bruno Roy alone in the darkness. © Todd Prekaski

For two laps, Miller and Bruno Roy traded either attacks or pulls, depending on interpretation, until a bobble by Bruno Roy on the stair section gave Miller the first significant gap of the night. Any questions about whether or not the two pros were “riding together while training” versus “racing for blood” were answered by Miller hitting the gas and staying on it, holding a five to ten second gap over Bruno Roy for the rest of the evening.

The fast, hilly course and pressure from Northcott eventually shattered the chase group and allowed her roll comfortably in for third ahead of Carey. The race for fifth, however, was tight until the end with Baum holding off Catherine Sterling (Bikeman.com) and Jamie Gilgen (Blacksmith Cycle) by just a few seconds. Gilgen had been impressing the crowd by attempting, and often succeeding at, riding the stairs, but a final-lap bobble relegated her to the back of the group. While Miller was the first repeat winner on the women’s side, no man save Justin Lindine (Redline) has ever won the race. This year saw his strongest challenger to date, with U23 National Champ Yannick Eckmann (Cal Giant/Specialized) toeing the line. Lindine led lap one, towing a surprisingly large and comfortable-looking group including Eckmann, causing much hand-wringing among the announcing crew who had unanimously picked Lindine for the four-peat. On the second lap, however, the Honey Badger put in a massive attack on the biggest climb that earned him a quick ten-second gap and silenced the doubters. The chase was led not by Eckmann, but by Peter Goguen (CF Racing), one of the elite juniors who had somehow slashed his way from a back row start to second place in under two laps.

Eckmann, though, was just biding his time and cruised off the front of the chase group on lap three, dropping Goguen, Adam Myerson (Team SmartStop/Mountain Khakis), Michael Van den Ham (Cycle-Smart) and Robert Marion (American Classic Pro CX Team) like they were a bunch of guys with day jobs.

Lindine was in a class of his own, though, opening up the gap on Eckmann and all other chasers on every lap and quickly lapping his way into the cat 3s, who were pretty psyched about this given how high the lap cards were. Eckmann teased the chase group by riding ten seconds ahead of it, which caused Goguen to shred one of the many grippy off-cambers so hard he rolled a tubular.

Lindine defended his title by a comfortable minute, with Eckmann rolling through in second. The race for third stayed close, but somehow Goguen managed to survive racing almost half the night on a rolled tubie to triumph over Marion and Van den Ham. There’s no rest for the weary at Holy Week, though, with racing action picking up less than 48 later at the Providence Cross Fest on Friday afternoon. The Cat 4’s were treated to the best visibility of the day on the switchbacked course at Ski Ward. © Todd Prekaski