Keys to Winning a Superprestige: Scratching, Washing, and Descending – A Mark Legg-Compton Report

Katie Compton won the Apere-Gavere Superprestige on Sunday (read the full race report), and behind her victory were three surprising keys to victory: scratching, washing, and descending. Her husband explains in his report below. The third round of the Super Prestige race series in Asper-Gavere was without the current World Champion Hanka Kupfernagel in wet and very muddy conditions. She refused to start the race after not receiving the start money she had asked for.

The big draw of the race was the steep muddy downhill that caused many falls throughout the race, some of which were race ending crashes like the one experienced by early race leader Saskia Elemans (ZZPL.nl)

Niels Albert, who was pre-riding the course after the women’s race, crashed on the downhill hitting his chest on his stem causing damage to his spleen. According the the newspaper Albert is still in the hospital and it is being reported he may be out of action for a month The setback will cost him valuable points toward his grasp on the UCI points lead.

Katie got off to an easy start in third position after a front row start. Saskia Elemans took the lead with Daphny van den Brandt in second. Katie briefly took over the lead before Daphny charged past Katie as they passed pit one heading for the steep downhill. Katie backed off letting a small gap develop so she could pick her own line down the technical descent.. Daphny crashed forcing Katie off the bike in a controlled dismount which allowed Czech Republic rider Pavla Havlikova to take over the lead which she held for the rest of the lap one. Pavla payed for her first lap efforts as she fell on off the pace eventually finishing fourth at 2:21 down from the winner.

Katie battled back from fifth position, fighting for traction on the slippery mud climbs, to the head of the race with Daphny van den Brand. Daphny took a spill on lap 3 on the chute forcing her to chase Katie. Katie would increase her lead in the remaining laps to take the win. Van den Brandt was caught by two Belgian riders, the young Sanne Cant (Selle Italia) and Veerle Ingels who would finish fourth. Ingles would later be disqualified for entering the pit and not taking a bike as it was still being washed at the time she entered the pit lane .

Katie took the win comfortably, 1 minute and 9 seconds in front of Daphny and another 13 seconds ahead of Sanne Cant.

Katie was happy with her race effort with it only being her second race in the mud this season.

“I love the course here, it’s really challenging in the mud and the downhill drops are freaking hard,” Katie said. “It’s the most technical downhill I’ve ever raced on a cross bike.”

Daphny was confused on how Katie could ride downhill so fast on the top of the bars as she struggled to brake in the drops, but Katie cited her top-mount brake levers as a necessary component for the steep downhills. She explained, “The cross brake levers let me stay further back on the bike and prevents me from falling over the bars easier than trying to ride in the drops. Also they give me more leverage for braking but I had to remind myself to get off the front brake on this course or you’ll be doing a superman off the bike.”

Katie will rest and train for the next round of the World Cup held in the seaside town of Koksijde, Belgium where she finished 2nd to Daphny van den Brandt last season. Katie is still suffering from a minor cold she picked up before Pijnacker World Cup, but is expecting it to clear up any day. 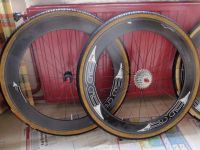 The hardest challenge for me was getting the most out of the brakes before the race, washing the dirty bike and getting it back in time for Katie who was pitting twice per lap in the muddy conditions. I spent 2 days before the race scratching the braking tracks to increase the brake pad friction.

Washing the bikes was an experience…the power washers were so powerful in Asper-Gavere they blasted the Edge decals off the rims. Our Campy worked well although there were many riders in other races who broke off their rear derailleurs.