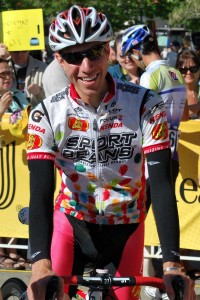 Jeremy Powers in full roadie regalia. Via Flickr by smthcriminal29

When Jeremy Powers (Jelly Belly) crossed the finish line in today’s Mad River road race, the queen stage of the Green Mountain Stage Race, he was in second place, just seven seconds behind race winner David Veilleux (Kelly Benefit Strategies). More importantly, Powers took the overall lead in the event – his first ever yellow jersey – with a comfortable gap of over two minutes over his cyclocross teammate, reigning national ’cross champ Tim Johnson. The only remaining work that stands in Powers’ way is a criterium on Labor Day, which should prove a mere formality in the quest for the overall victory.

While the more knobby-oriented among the cyclocross scene were out strutting their stuff at MTB Worlds in Quebec, the Northeast-based roadie/’crossers were showing that they’d be a force to be reckoned when our favorite season finally rolls around. Powers and Johnson, who sit in first and second, respectively, in the General Classification, will both be racing again for the Cannondale-Cyclocrossworld.com team shortly, as will Jamey Driscoll (Jamis/Sutter Home on the road), who currently sits in fourth.