INDIANAPOLIS, INDIANA – With tons of tents and nearly 1000 racers and fans, the OVCX series finale must have looked like quite the circus for those traveling on I-65 near the IndyCycloplex, home of the Major Taylor Velodrome. In his bid for a U23 Worlds Team selection, Josh Johnson (Bissell-ABG-Nuvo) took another step toward that goal by winning the Elite Men’s event. Always at home near a velodrome, Michigan’s Mackenzie Woodring (Einstein Cycling) won the Elite Women’s race. If that name rings a bell, in 2009 Woodring (as pilot) and Karissa Whitsell broke the Para-cycling track pursuit world record that Whitsell had previously held with fellow ’crosser Katie Compton.  Special thanks to Marian University, Mathew’s Bicycles and Sun King beer.

Johnson was dominating in the Men’s Elite Race. Coming on the heels of a few days of rain followed by a dry morning, the mud on the course had turned to a thick soft clay-like consistency. That didn’t slow Johnson. From the whistle and the back, Johnson threaded his way to the front along the tape through the flat opening sections. Within the first few turns he opened a gap, hopped the barriers, and said goodbye. With a clear line to ride up the slick steep hill behind the velodrome bleachers, he was gone. Or, so everyone thought. “I went down on the switchback descent in front of all the spectators,” Johnson confided after the race.  However, he had enough of a gap to get his chain back on and press forward for the win. Behind Eric Anderson (Zipp Factory Team) and junior Spencer Petrov (Lionhearts) fought for early position with Chad Tieman (Team Upland p/b Sustainable Cycling) knocking on the podium door. Using it as a training race for Nationals, Petrov sat up mid-race, handing second to Anderson and third to Tieman. Johnson dedicated the win to friend and OVCX ’crosser Nicole Borem, who is recovering from a recent surgery.

OVCX wishes the best for Johnson as he heads for Europe to race the December classics.  As for his U23 Worlds Team aspirations, he’s taking a calculated approach.  “Nationals is going to be the final selection race that is looked at before determining the U23 World’s team for Louisville.  My goal is to place in the top three in the U23 race and put myself in a position to win the D1 collegiate race (for Marian College). If Europe goes well and I can have solid rides at Nationals, this will give me the best possible chance to make the U23 Worlds team.” 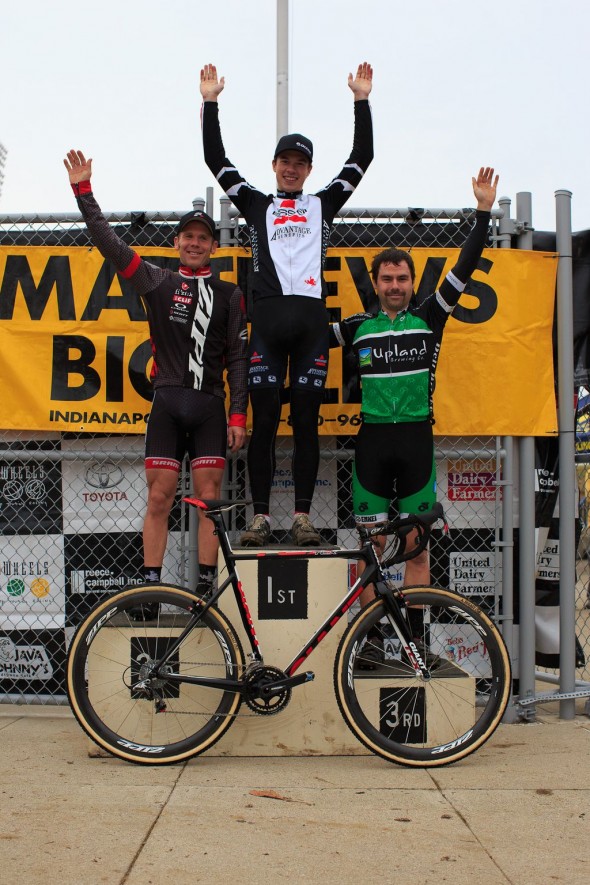 In the Women’s Elite Race it was another back to front story for Mackenzie Woodring. “I had to move up as quickly as possible with a strong field of over 30 women. In a large field like that, a gap can form pretty quickly and make it difficult to chase down the leaders within 40 minutes.” It took half a lap for Woodring to reach the wheels of Gerry Schulze (BioWheels/Reece Campbell Racing) and multiple national champion Coryn Rivera (Exergy TWENTY 12). “I stayed with Coryn (and Schulze) for a few minutes and then came around. Knowing her accomplishments and background, I was super stoked when a gap formed.” Through the wicked slick off camber descents, Woodring (fourth at the Iceman mountain bike race this year) kept it smooth, clean and crash free for the win. Less than a minute behind, Rivera (fifth at 2012 Elite Nationals) and OVCX Masters Champion Schulze were headed up the hill’s off-camber switchbacks as Woodring was on her way down to the finish. However, due to confusion with the lap counter seemingly going from two laps-to-go to zero, neither knew it would come down to a sprint right then and there. As they hit the pavement through a thick cheering section, Rivera and Schulze were nearly even. Digging deep, anticipating another lap, Schulze put her head down for the long paved section ahead. Rivera looked up and saw the lap counter at zero. Instinct told her to sprint. She did and edged out Schulze for second to some gasps from the crowd.

Next post Coaching Corner: Lower Your Workload to Increase Balance and Reach Your Goals