Although not specifically a cyclocross racer, some folks consider John Tomac one of the most famous drop bar dirt racers of all time. Tomac is featured in the latest edition of Bell Helmet’s “Bell All-Stars” video series. 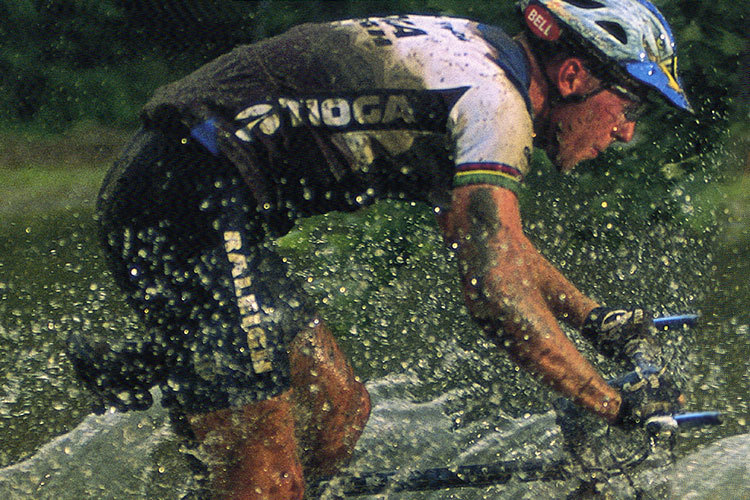 The video interviews Tomac at his ranch in Colorado. Now 50, he splits his time between his ranch, where he has built two motocross tracks, and traveling with his son Eli to motocross races.

From the accompanying story:

“John Tomac runs this operation. He has two full-time ranch workers on staff, but he’s a hands-on boss. Most days, he’s out there getting dirty. The retired pro bike racer, winner of world championships, World Cups and national titles in multiple disciplines, knows that no one ever said ranching was easy. But to see him here on his sprawling 800-acre property, surrounded by the La Plata and San Juan Mountain ranges in the high desert plateau of Cortez, Colorado, is to see a man who is truly in his element.

This rough-hewn life can seem at odds with Tomac’s years as a professional bike racer. Because, let’s face it, he made it look easy. From BMX to cross-country, road racing to downhill, Tomac moved in and out of all varieties of bike racing; and wherever he went, he won. In the late 1980s and ’90s, his image was everywhere. He was a poster boy. A rock star. One week we’d see him bombing down a dusty mountain trail in the Rockies, riding a Yeti with drop handlebars, the next he’d be hammering the cobbles of Paris-Roubaix with Team 7-Eleven.”

Tomac’s career on the road coincided with the rise of EPO use in professional racing. Off-road racing provided a way for him to continue in the sport.

“Considering where he came from, and the life he has built here on the ranch, it’s easy to understand that decision. Shortcuts aren’t really Tomac’s style. ‘For me, it’s like what’s the point of winning if you’re cheating,’ he says. ‘What have you accomplished?'”

As he closes in on his 50th birthday this year, Tomac still likes to get out and ride trails. That’s his way to relax when he’s not busy on the ranch or traveling the motocross circuit with Eli. ‘My favorite thing is to ride the high-country trails here in Colorado,’ he says. ‘Stuff that’s rugged and pretty high up there. I normally ride a bike with about 120mm of suspension, 650b wheels and 3-inch wide tires to handle the nasty, rough terrain.'”