(Jamesburg, NJ) – The weather may have been having riders begging for water in Valkenburg, but in New Jersey, wind and cooler temperatures made it feel like cyclocross for day two of HPCX (UCI C2). Overnight course changes and dryer ground made for fast group racing all day.

Maximenko Gets the First UCI Win of Her Career 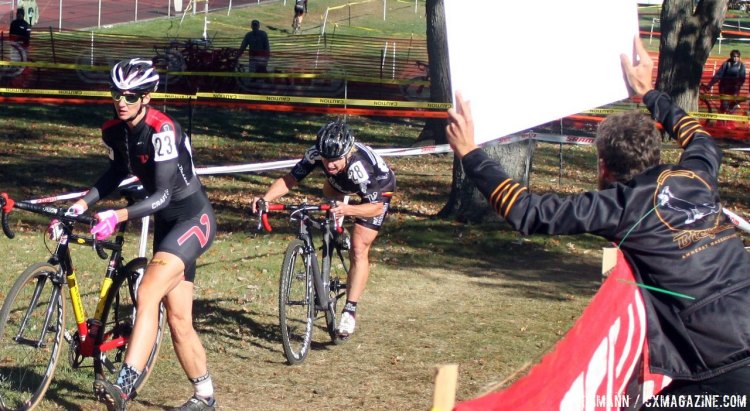 Between trumpeters, hecklers pleading riders to bunny-hop the larger-than-average barriers, and signs demanding a party, Maximenko and Van Gilder had no shortage of an audience. © Andrew Reimann

By the third lap, the race started to take shape with Maximenko and Van Gilder off the front with Gross and Jessica Cutler (Jamis Bikesport/WA Bike Law) in the chase.

Maximenko would shed Van Gilder with two to go as Cutler moved into third.

“Today was really hard,” said Maximenko. “I didn’t get the best of starts and then got tangled up in the first go at the Belgian stairs. Initially, I thought it was game over because I was back in fifth and then I just kind of put my head down and chased. I gained a couple spots and then got into the top 3. Then me and Laura [Van Gilder] moved into first and second, and I said to Laura on one of the climbs, ‘Laura, we gotta go. They’re gonna catch back up to us!’ She let me by, and I just kind of took off. I figured she’d stay on my wheel and then we came around a couple corners and somebody shouted ‘you have a gap!’” Bowman also had a great ride, weaving through the course to capture a top five. © Andrew Reimann Todd Wells led for much of the race, while Jeremy Durrin also held on the front early. © Andrew Reimann

Four laps in, the group had shrunk to the eventual podium of Dodge, Wells, and Timmerman. Durrin was left to chase with Anthony Clark (JAM Fund/NCC) hot on his heels. Anthony Clark was constantly threatening the podium both days of HPCX. © Andrew Reimann

With three to go, Timmerman was nine seconds behind the duo of Dodge and Wells. Dodge and Timmerman were pushing the pace day one and two of HPCX. © Andrew Reimann

Next post Valkenburg in Pictures - Full Results: Men, Women, U23 and Juniors