Gravel races and events have their unique characteristics. Nearly all test riders in distance and climbing, and some events merge elements of bike packing, cyclocross and even straight up road racing. Most gravel events grow out of the local riding culture and are often dictated by terrain.

By any measure, this year’s running of the Hunt of the North in Carlsbad, California was unlike any other gravel grinder you will find.

Not a race in the traditional sense, The Hunt of the North is still a test of riders’ gravel speed and prowess. However, riders must also rely on their orienteering skills as much as their proficiency on dirt, sand, technical singletrack and tarmac.

Perhaps most importantly, riders must draw upon situational awareness to become “hunters” of gravel, literally, to collect five pieces of uniquely colored gravel in five hidden locations and return before a time cut-off. 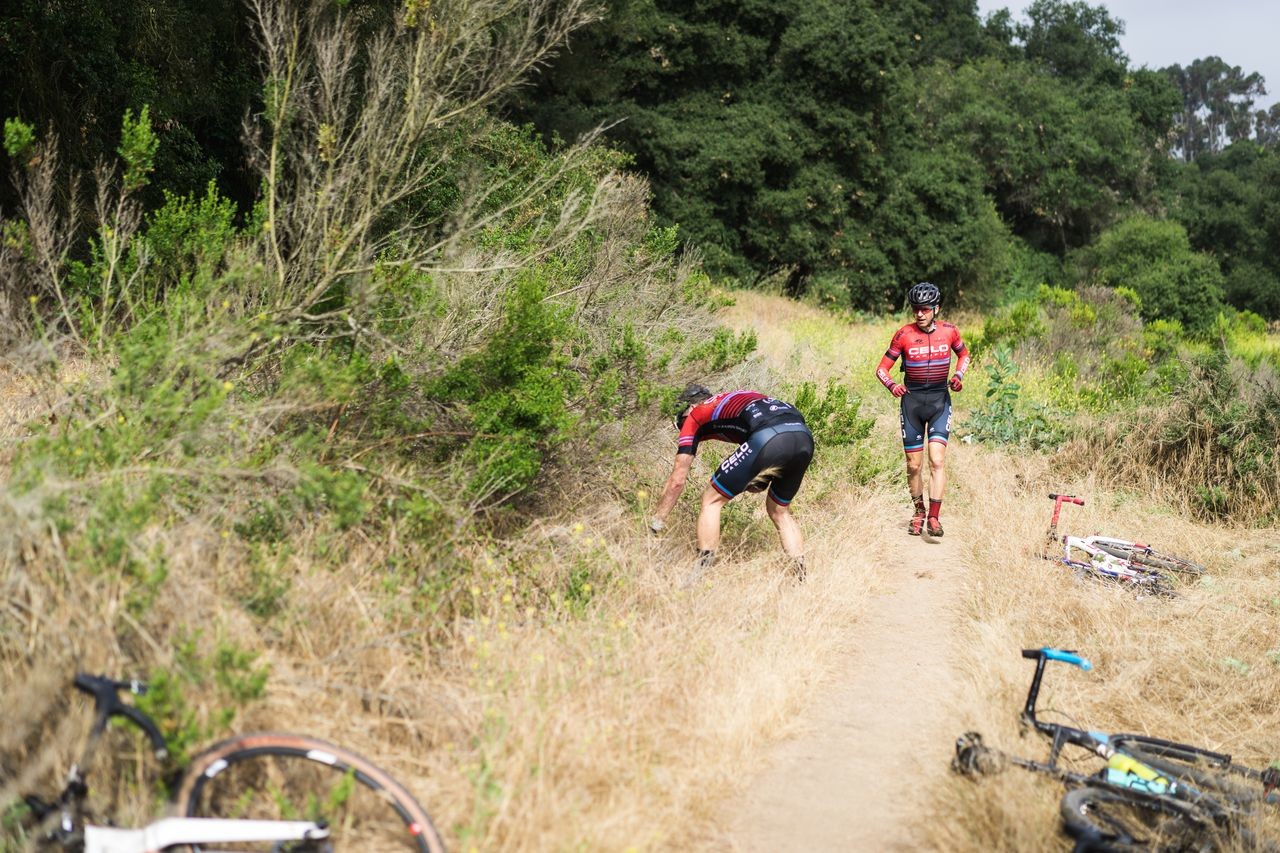 Riders had to search for colored pieces of gravel. 2019 Hunt of the North Gravel Race. © Chris Cox

The Hunt of the North is the brainchild of Gravelstoke’s founder, Dave Malwitz. “The original concept was to create an event that would challenge riders to take on my favorite elements of gravel, including navigation, camaraderie and challenging terrain,” Malwitz said about the event.

The 2019 event that took place two weekends ago was the second edition of the Hunt of the North.

Departing shortly after 8 a.m. from event host and sponsor, Canyon Bicycles USA, located in the heart of coastal North County San Diego, participants had just 24 hours before the start to craft their routes based on GPS coordinates provided by the organizers. Suggested routes were also posted in case riders’ knowledge of the local trail network was limited. Through the scrub brush and craggy hills of the region, it was not always easy for riders to find their way, and they were faced with other challenges not typically encountered in gravel events.

Lauren Stephens of Team TIBCO – Silicon Valley Bank said, “I knew it would be an adventure, but I had no idea. I thought the challenge was to navigate to five locations and collect rocks. But quickly it became navigating through singletrack trails on a gravel bike and climbing ladders! Finding the rocks was the easy part. Can’t wait for next year.” Just the weekend prior Lauren placed 2nd overall and 1st among women in the DK100.

When riders returned to Canyon with the five pieces of colored gravel, they were given a ticket for the raffle that included quality products from the event sponsors. The day’s efforts were also rewarded with a full taco feast and Hunteur Ale, a special release for the event crafted by Rouleur Brewing.

Fresh off of this year’s Dirty Kanza 200 race, the 2017 DK200 winner Mat Stephens, said, “The gravel world is a diverse universe, and I’ve seen both ends in one week. From racing near the front of DK200 to enjoying the scene and adventure of The Hunt of the North, both were an awesome experience. If you haven’t found what you love about gravel, you just need to keep hunting.” Mat races for the Panaracer/Factor p/b Bicycle X-Change gravel team. A number of awards were presented by Gravelstoke, including the rider who most embodied the spirt of the Hunt of the North, which went to Brent Prenzlow of Celo Pacific.

Next post You're My (Gravel) Boy: Blue Returns with Hogback Gravel Bike