Michigan might be known as the “Mitten State,” but there is another part of the state tucked in between Lakes Superior and Michigan north of Wisconsin called the Upper Peninsula. The U.P., as folks call it, was long known for its copper and iron deposits, and not surprisingly, has a rugged and hilly terrain different from surrounding parts of the Upper Midwest.

It is on that terrain and against that backdrop that The Crusher gravel race took place last weekend. The 225-mile race is not to be confused with the Crusher in the Tushar, although the brave souls who completed the U.P. version of the Crusher would likely argue they had the more difficult task.

While the Lower Peninsula has put itself on the gravel map with the Barry-Roubaix and Coast-to-Coast Gravel Grinder, ultra-endurance events are endemic to da U.P. thanks to the 906 Adventure Team. The Team also hosts the Polar Roll fat bike race in the winter and the brutal Marji Gesick mountain bike race in the fall.

“I look at ultra-ultra events as being super effective life-training events,” 906 Adventure Team’s Todd Poquette said. “906 Adventure Team is a 501c3 Non-Profit, and we have this crazy formula featuring ultra butt-kicking events for adults and adventure bike club for kids. We empower people to discover the best version of themselves through outdoor adventure.” The 2019 Crusher started at the northern end of the Keweenah Peninsula in Copper Harbor and wound its way south to the Lake Superior city of Marquette. Along the way, riders rode an actual distance of 232 miles and climbed nearly 10,000 feet.

“I love point-to-point events. They’re hard. Logistics are a pain in the ass,” Poquette said. “You have to be prepared. You gotta bring your eh-game. Marquette is a mountain bike capital, so is Copper Harbor, that’s how I decided the beginning and end this year.”

The Crusher bills itself as “Enhanced Gravel.” Marquette, Houghton and Copper Harbor are home to impressive mountain bike trail networks, and with 906 Adventure’s hosting of the Marji, Enhanced Gravel seemed like it could go a lot of ways.

“We use gravel, ORV trails, old railroad beds, rivers, Michigan’s highest point, logging roads, jeep trails, sand and Mosquito gulch,” Poquette said. “Eighty percent of the course is devoid of cell service and highly remote. Racers reported seeing a bear, bobcat, coyote, badger, fox, moose and porcupine. Roll it all up and you have yourself some enhanced gravel, as found in the UP.”

The 2019 Crusher rolled from Copper Harbor early Saturday morning. With a 36-hour cutoff, you know the route is challenging, and Poquette said most riders were expected to finish sometime after sunset. The challenge of the enhanced gravel route is not unintentional.

“We create journeys—and experiences—intended to push people to their limits, riddled with intentional obstacles, tempting participants to crack,” he said. “The hardest stuff is always at the end when you’ll be at your weakest and darkest place, both figuratively and literally, because you’re hurting and it’s the middle of the night.” The Crusher is a challenging race for all categories. © Ryan Stephens

The Crusher route is not necessarily the most direct route from Copper to Marquette, hugging the west side of the Keweenaw Peninsula for most of its length, so to help keep folks honest and on track, each was required to carry a “passport” that they filled out at each of five checkpoints with activities such as taking a selfie.

Waiting at the end of the ride was a Ti Crusher Cup for each rider who finished by the time cutoff. That approach is a bit different than the Marji Gesick, which famously awards handmade belt buckles to each sub-12-hour finisher. The Marji has a 60% DNF rate, so those buckles are hard-earned.

The Crusher could have been a 300+ mile trans-U.P. trek from Copper Harbor to Mackinac Island, but Poquette said that is not the goal for the event. At least not yet.

“For some, Marji is about the buckle but the everyday man and woman will never claim one, it’s out of reach. I think that’s ok, but Jim from Indiana needs something to hang his hat on too. He has a family, works too many hours a week, doesn’t take good care of himself, and needs a kick in the ass. Crusher is that kick in the ass. It’s sorta like a Marji for the everyday man and woman.” 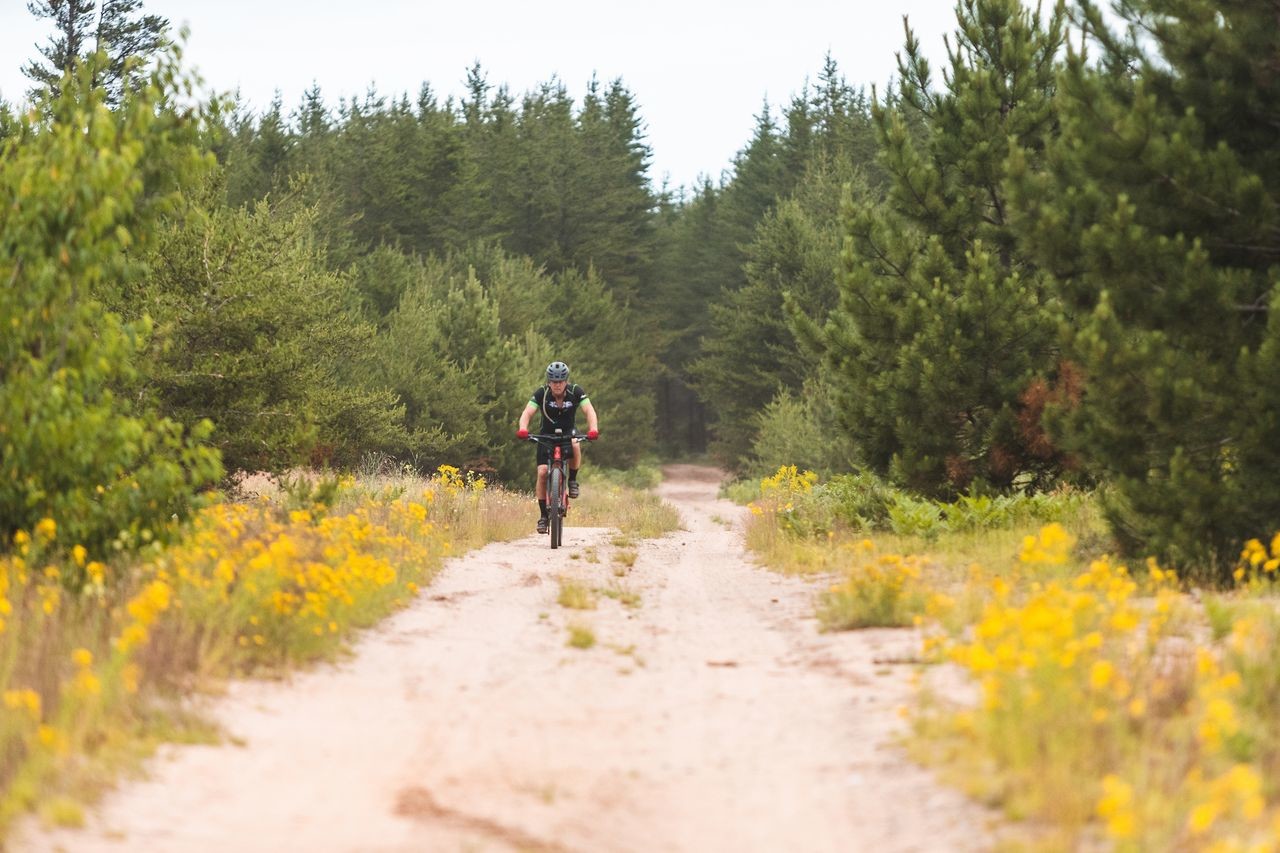 The goal of The Crusher is to be hard but finishable. © Ryan Stephens

Could a Cross the U.P. route be coming as an even bigger kick in the butt? Maybe!

“I’m leaning toward changing the route every year, running it backward or making it end-to-end as you mentioned,” Poquette said. “We like to mix things up, keep the events fresh and present new challenges. We don’t want people getting comfortable and weak.”

Although the 225-mile Crusher is an overnight ultra-endurance challenge, the event also offers all-inclusive distance options, with 100 and 30-mile solo rides, a 50-mile team ride and a 50-mile ultra run.

Thanks to a bit of a fluke of geography, riders had a little help in chasing the sun on Saturday. Marquette is more or less straight north of Milwaukee, but since it is on Eastern time, sunset was around 9:30 p.m. on Saturday. Despite the help, the challenging route forced most riders to finish after dark or even the next morning.

The top finisher for the Men was Mark Kransz (KONA Bicycles/QSBS/CFA), who finished just before the sunset with a time of 15:15. Tinker Juarez and Nick Stanko rolled in together to take second and third. Mitchell DeYoung (Hammer Nutrition, Rudy Project, ESI Grips, Wolf Tooth Components) and Tyler Weston (TITAN/ICW/M22) rounded out the wide-angle podium.

Full results for the 225-mile race are below.