The Girl with the Cowbell Tattoo: Thankful.

It’s Thanksgiving here, which means family time. Actually, to that end, it’s been a whole week of giving thanks for my family, both biological and chosen.

I’m thankful for so many things: the people who surround me, the muscles that I have that allow me to pedal my bike (albeit not always as hard as I’d like), a family that supports me, some seriously awesome bikes to ride around, home in a great spot for racing in the US, and an amazing outlet for writing about it all. Yep, I don’t have any complaints to speak of.

Today, what I was most thankful for was the mountain bike ride that I did in the local reservoir near my parent’s house in New Jersey. Firstly, because I’m now able to go out confidently on a mountain bike and feel capable on the trails, though I still have a lot to learn. Today though, there was a different reason to give thanks. I knew our area had been hit by Hurricane Sandy — they didn’t have power for 10 days in my parents’ town — but it wasn’t until I got into the woods that it struck me just how lucky we were to be as untouched by it as we were. It’s strange that it took a MTB ride to find that out, but by the time I made it home, most of the obvious storm damage in our area (other than the power outage) had been cleaned up, so I didn’t realize how hard we were hit. So this year, I’m most thankful that my parents’ house was OK after the storm, and that my friends and family in the area were unharmed as well, other than a couple of slightly soggy basements and tree-damaged garages. 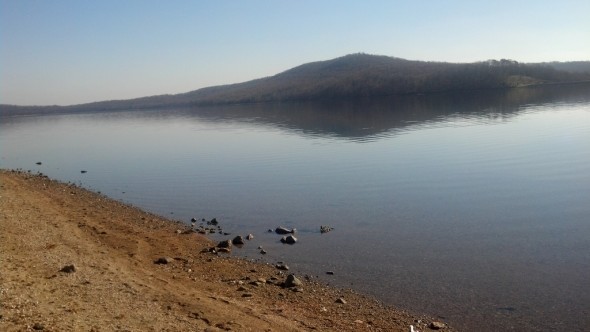 The good view from my ride today. © Molly Hurford

Looks nice, right? I saw that the trails were marked as hazardous from downed trees, but I didn’t think much of it. Barrier practice, I told myself.

Well, turns out it wasn’t exactly as simple as that. 15 minutes down the trail, I had already dismounted and remounted about 10 times, after hitting branches and trees like so: Part of what used to be a perfectly groomed trail. © Molly Hurford

And it was 15 minutes in that I really started to see what the storm was capable of, when I saw tree after enormous tree ripped out by the roots and sideways on the trail, so many of them that it was impossible to pass through. MTB against one of the giant downed trees. © Molly Hurford

Instead of being annoyed that my ride was cut short, I realized just how close our area came to serious damage. Sure, the trails stink now, but a few Boy Scouts with chainsaws and some trail maintenance crews will hopefully make it rideable again for this spring. At least, I hope so. And when I’m home in March, I’m hoping to be part of that cleanup effort. And on that note, another bit about giving back! November is typically a rough month for my family: all of my grandparents passed away during this month in the past decade, three of them from cancer. Normally that isn’t something I’d bring up in this column, but this year, it seemed relevant. See, I’m thankful that I’m in a community where there are people like Sam and Ellen, two great young racers, who are working to raise money for cancer research by selling some gorgeous bracelets (and stem decorations, if you’re not the bracelet type!). Find out more about them here, and consider helping them out.

Now, it’s time for me to take a nap. There is a slight chance I overate a teensy bit, post-MTB ride at our family dinner.

Before I start snoozing though: the thing that I’m most thankful for this year is all of you. I say it column after column, but the cyclocross community has become an amazing family for me, and I love you all more than I can say. Happy Thanksgiving! Last supper to clean out my old apartment with my bike family. © Molly Hurford