The Girl with the Cowbell Tattoo: What State Am I In?

I guess the title of this post can be read two ways: physical or mental state? And I think the correct answer is: both. When I decided to move to Massachusetts last spring, I thought I’d be set for the season: no travel more than two hours to get to any race I’d be doing. All I can think of is that cliche: “We make plans and God laughs.” These days, my parents call me and instead of asking how I am, they first ask where in the US I am. And often, it’s not the same place that I was the last time we spoke. But, as I’ve said many times in the past two months, it has been one amazing ride.

Before I start waxing poetic about the newest stop on my trip (Louisville, Kentucky, with elite racer and good friend Justin Lindine and the Redline team, including junior phenom Logan Owen!), I can’t say enough about the amazing experience I had at the Cross Crusades in Bend, and my great stay in Portland, Oregon, with my friend Brandon from Planet-X bikes. They were kind enough to house me and lend me an awesome bike, so I got to try out disc brakes for the first time on a course and in a race unlike anything that I’ve ever experienced. And the people in Portland were incredible, the sense of community I immediately felt was amazing: Molly Cameron hosted a book reading for me at the Portland Bicycle Studio, the fellows at Chris King gave me a crazy cool tour of the factory, and I ate at so many vegan donuts at VooDoo donuts, I’m shocked that I wasn’t sweating powdered sugar. Cross Crusades is about bike racing, but it’s also about having fun while doing it. Molly Cameron suggested that I make the trip out for Halloween weekend, and she was definitely on point: the racing was fast and furious (Chris Jones lapped me. Twice!) but spirits were high, and most of the elite racers took to the course in goofy costumes.

The weather was perfect: 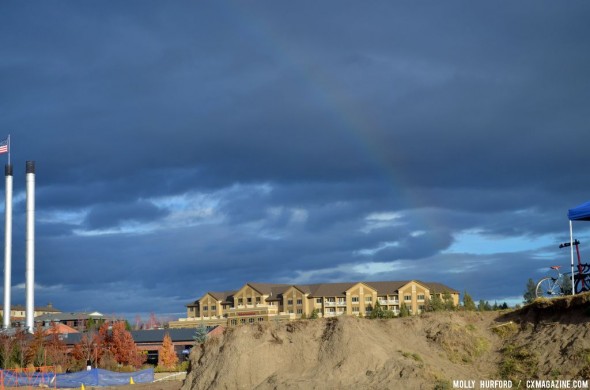 And even the kiddie race was out-of-control awesome, with at least a hundred tykes scooting around the makeshift course. Lastly, I made a new best friend (actually, three of them. But two are people, and only one can make a face this amazing.): Hanging out with my new best friend, Sid. © Cyclocross Magazine

So while I was sad to leave Portland, I was thrilled to come home, race at my “hometown” race, Cycle-Smart International. The racing was intense, but after the hour long race while on course with the elite men in Oregon, it almost seemed tame, and my new training plan of riding once or twice a week as time and travel allow, and running or stretching whenever possible (not often enough) seemed to be paying off, as I was able to competently navigate the field to a top-half placing against some crazy-fast women. JD Biladeau, Adam Myerson and Alec Donahue know how to run an excellent race, and with the help of Patrick Goguen, a up-and-coming New England course designer, I can safely say it was the best version of that course I’d ever been on. And as an added bonus, I got to host some buddies from Pittsburgh and some new friends from Quebec, including MTBer Raphael Gagne and JP Thibault-Roberge , who not only helped me move a couch, but left me a can of maple syrup!

Of course, I didn’t have much time at home before hitting the road again. You can bet that the next installment of this column will be talking up the Worlds course in Louisville, and the awesome road trip skills of Justin Lindine. If you’re in Louisville, please come and say hi!