While we don’t often post course previews, since this one previews a course that literally rides around—and on—a castle, we couldn’t resist. 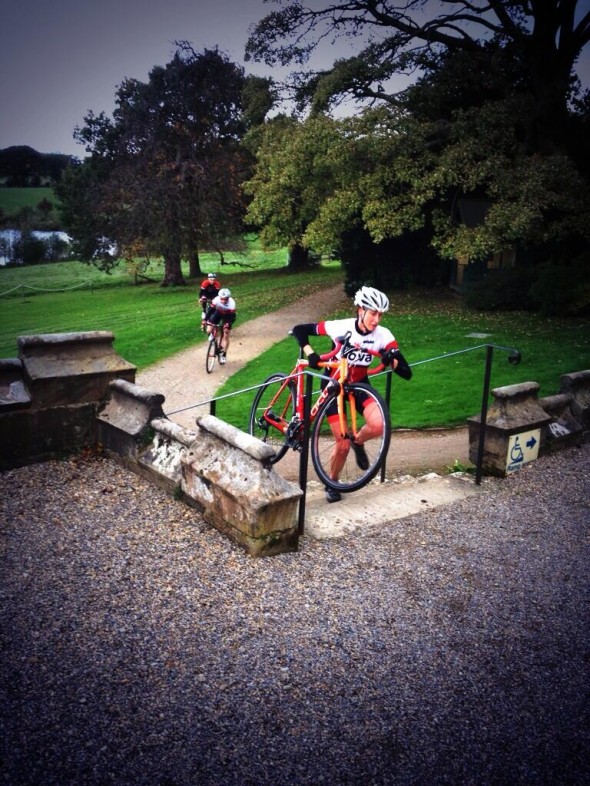 Set in a rolling deer park, the nine-hundred-year-old Ripley Castle is situated about two miles north of Harrogate, which makes it easy to travel to on fast A roads from Leeds, Bradford, the North West and North East.

The organizing team, led by Steve Smales, has sought the expertise of key members of the Yorkshire Cyclo-Cross Association with regards course design to design a scenic and spectator-friendly course that includes a wide range of technical challenges interspersed by plenty of fast stretches on a variety of surfaces. Given that the event leads up to the British National Championships, and that New Year’s Day is often a day for outdoor pursuits, it is anticipated that the event may draw large numbers of competitors, from across northern England. The potential for a large entry has been at the forefront of the course designer’s mind. Because of that, designer Tim Evans has worked hard to avoid early bottlenecks as far as possible to ensure that competitors come away with the result they deserve.

From the gridded start competitors negotiate grassland in the deer park before dealing with some off-camber sections where there will be undoubtedly difficult decisions to make regarding running or riding. The barriers will be another place for decision-making and won’t necessarily be the full 40cm height, in order to deliberately tempt the confident and provide spectators with some extra entertainment.

From the grass, competitors enter the castle courtyard up some shallow steps that the talented or unhinged may well choose to ride in a last lap decisive move… if they’ve got the engine after the proceeding heavy section. The next 300 meters to the line requires negotiation of some corners with tricky changes of surface including cobbles and tarmac and hardpack gravel. These could see an exciting ‘inside leg out’ finale should a group enter the finish together and it may well be that the experienced will seek to dispatch any company before this point.

Following the line, riders negotiate onto a fast, off-camber transition to woodland that has potential to test nerve should we have the blessing of wet weather pre-race. From there, the course takes to the twists and turns of the woods which include an almost unique circumnavigation of a huge tree with protruding roots where even the best technical riders will be faced with a dilemma, run close to the trunk or smoothly ride three times as far about eight meters out. On leaving the woods, riders will be presented with downhill transition to a Euro-style grassland course with two sections of tricky off-camber.

A key area of the organizer’s focus has been to deliver an event that is as good for spectators as it is to ride. A key feature of the event is that there course is about sixty percent viewable from the castle’s graveled terrace with a short walk of about 40 meters allowing spectators to see riders at close quarters a second time on each lap. Ripley Castle is providing a cyclocross-style menu, including a licensed bar. The pit arrangements are convenient with easy vehicle access for equipment drop off with mains water, should it not freeze. Post-race changing and showering have been secured a short drive away at Killinghall Moor Country Park, a venue well known to YCCA Summer Series regulars.

A full program of racing starts at 10.30am and it is hoped to have the course available for practice at first light. There will be an enter on the day, half hour novice race included with a 10.30 start time for first time adult riders. The total prize list exceeds £1200 in value and the event will be offering equal prizes to male and female competitors.

The organizing team very much look forward to running this event and hope to give everyone a great day out be it to blow away the post-Christmas cobwebs, have a first try at cyclocross or perhaps sharpen form for the National Championships.