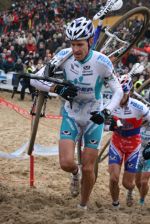 photos by Bart Hazen of the Daily Peloton

Erwin Vervecken feels quite at home in Koksijde, Belgium. For the fifth time in his long career, the Belgian won on the sand dunes of Belgium, taking the victory in a Fidea-dominated race, with four Fidea riders in the top five. Vervecken is clearly coming back to form, and after steadily improving results this season, used his sprinting ability to beat UCI Points Leader Sven Nys in the finishing stretch for the win.

After neutralizing early attacks by Klaas Vantournout and Sven Nys, Fidea had an impressive four riders in the the lead group of six late in the race, and took turns attacking Nys on the last lap. First Wellens took to the front, then Stybar, and when Nys made his final late attack, Vervecken stayed close. Nys took to the final pavement stretch with a lead, but kept looking back, wary of the sprinting abilities of Vervecken. Vervecken closed the gap, sat in the draft, and sprinted to victory past a gassed Nys. Stybar, Wellens, and Pauwels finished in third, fourth, and fifth, respectively. American Jonathan Page did not finish.

Vervecken was delighted with the win, and was clearly not expecting a victory going into the day. The tall Belgian barely made the World Cup team, but said his win was “an unexpected success” and realizes he’s slowing. “If you’re 36 years, you know that your best years are behind us,” he said.

Wellens was upset after the finish with his fourth place, and was unhappy that the lead group had so many Fidea riders, despite his teammate’s victory. He complained that Nys raced for him to lose, and instead of escaping with just him on the last lap, a situation in which “he [Nys] would win eight times out of ten in a sprint,” Wellens accused Nys of letting the chasing Fidea riders to rejoin to reduce Wellens’ chance of victory.

Video highlights from our community site: