We recently learned Donnelly Sports would no longer be licensing the Clement name. Today, we learn the future of the Clement Cycling team that included Jamey Driscoll, Lance Haidet and Laurel Rathbun. The trio will now be racing under the Donnelly Cycling banner wearing kits that look similar to the ones Driscoll and Haidet wore at Nationals in Hartford. Read this release for more information.

With a few days until the start of the 2017-18 cyclocross season, Donnelly Sports is proud to announce its professional cyclocross team for the upcoming campaign. Returning to the squad are U-23 National Champion Lance Haidet, U-23 standout Laurel Rathbun and Jamey Driscoll, who earned a silver medal at last year’s National Championships in Hartford, CT.

Although the Donnelly name may seem new to the circuit, it was the management group behind the highly successful Raleigh-Clement racing teams. In four years, Donn Kellogg, team owner and manager, has built a successful program that solidified itself as one of the best cyclocross teams on the domestic scene. The Donnelly Team will continue this tradition for the 2017-18 season competing on the race-proven PDX, MXP, LAS and BOS tubular tires.

“Donnelly Sports has been through some huge changes this year and our commitment to the sport will not waiver,” said Kellogg. “Cyclocross is the roots of this company. We are committed to supporting the racing community to the best of our ability.” 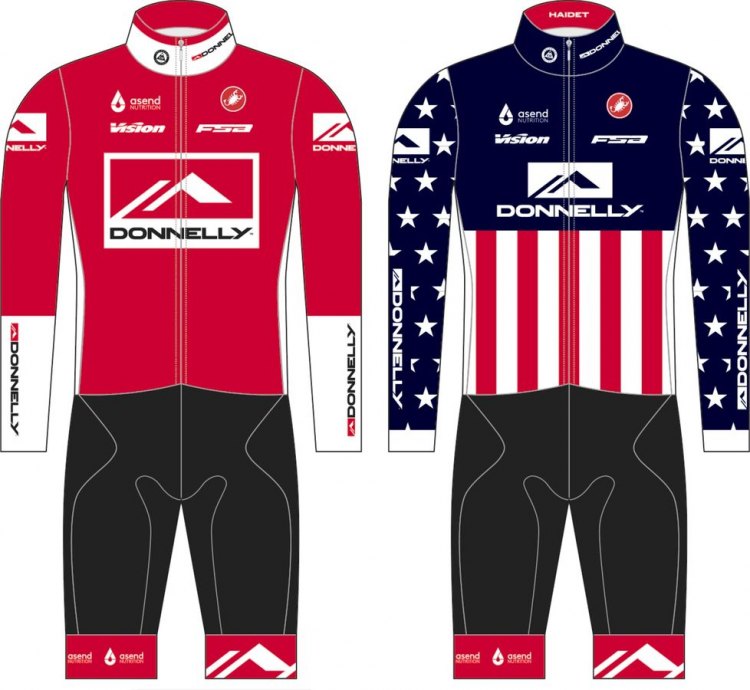 Donnelly Cycling riders will be wearing new kits this year. The stars-and-stripes is for Lance Haidet when he races U23 events. photo: courtesy

Donnelly is proud to welcome Pivot Cycles to its group of sponsors. The team will be racing aboard the competition-ready Vault frame. This versatile bike is the perfect tool for chasing cyclocross podiums on the weekend and for training on gravel roads and trails during the week. “Like Donnelly, our commitment to superior design and cutting edge technology never ends,” said Rachel Byus, Pivot Athlete Coordinator. “We are confident the Vault will help the Donnelly team be at its best on race day and build upon its years of success.”

Veteran rider and new father Jamey Driscoll has been with Donnelly for several years and will be racing UCI races around the country and looking to best his silver medal performance from the National Championship last season. “I’m more focused and driven than I have ever been. My summer preparation has gone very well and I am really looking forward to the season,” said Driscoll. “I’ve been racing for quite some time now, but my motivation to win is as high as it’s ever been.” U-23 National Champion Lance Haidet returns to the team with big ambitions. After his breakthrough season, Lance is poised to give the best riders in the country a fierce battle every time he pins on a number. “Winning the National Championship last year was an amazing experience. One I’ll never forget,” said Haidet. “However, being the best young rider in the U.S. is not main goal. I want to be one of the fastest riders in the country, regardless of age.” Due to a season ending injury Laurel Rathbun was not able to reach her goals last year, but after a summer of recovery and training, she is ready to go. Rathbun is a senior at Marian University in Indianapolis and is a top collegiate cyclist in track, cyclocross and road. She looks to make waves with the fastest cyclocross women in the U.S and earn trip back to the World Championships. “I”m finally healthy and ready to race. It was tough to sit on the sidelines last year, but these things happen,” said Rathbun. “I’m as ready as I have ever been for a race season to start.” The team will be racing aboard the race-ready Pivot Vault equipped with the Full Speed Ahead K-Force WE electronic groupset. Donnelly tubulars will be glued to Vision carbon fiber wheels. The team’s Pivot Vaults will also be outfitted with Stages power meters, Lizard Skin bar tape, K-Edge accessories and Prologo saddles. The team will also be wearing Castelli custom apparel, Giro helmets and SockGuy socks. Asend Nutrition, co-founded by team rider Jamey Driscoll will keep the team fueled for the season.