The way the Cincy3 courses are set up day to day, each a different venue, it could be a stage race. Friday Compton and Jeremy Powers (Rapha/Focus) won on a rain-soaked diabolically hilly course at Devou Park in Covington, Kentucky. Saturday was the opposite, with Trebon and Compton taking advantage of a relatively flat course that played out more like a criterium. Sunday’s C-1 race, the queen stage, features more of everything: longer hills and more wide-open flats.

Men’s Pro Race
Confusing the crowd from the gun and maybe a ploy to launch teammate Ryan Knapp, regional strongman Mitchell Kersting (Bob’s Red Mill) surprised everyone with a thrilling drive through the holeshot. With the help of Trebon and locals cheering, Kersting made the first selection with Tim Johnson (Cannondale/CyclocrossWorld) and Belgian Ben Berden (Ops Ale/Stoemper). Jeremy Powers (Rapha/Focus) brought up the chase through “the horseshoe” with Travis Livermon (Smart Stop/Mock Orange), and Jamey Driscoll (Cannondale/CyclocrossWorld).

Right then and there, Trebon, wanting nothing but the win, took the front and mashed out a punishing pace so hard that holeshot winner Kersting fell out of the top 10 by the middle of the second lap. Only Johnson could stand in the shadow of Trebon, gapping Powers and Berden and leaving Livermon, Driscoll and, look at that, Ryan Knapp in group three.

The second time through the pit on lap two, Powers seemed to have an awkward bike change, which allowed Driscoll and Livermon to catch back on the chase train. Through the start/finish going into lap three, Powers went to the front of the chase group in an effort to bring back the charging Trebon and Johnson. Sensing the danger, Trebon attacked just past the tennis courts and continued to increase his lead over Johnson to five seconds through the tricky fast up/down horseshoe feature.

Powers poured it on to take third in front of Berden. ©Jeffrey Jakucyk

J-POW! OVER THE BARRIERS
The fireworks at the front, burned those in back. With Johnson in no-man’s land behind Trebon, Powers was left to do the work over the next few laps with Livermon, Driscoll and Berden. With teammate Johnson up the road, Driscoll was content with Powers in the driver’s seat. Knapp fell back to seventh with Sean Babcock (Kona.)

Trebon’s lead grew to 15 seconds by lap six. With Powers determined to snag the last spot on the podium, he made the crowd collectively “ooh” as he bunny hopped the barriers and opened up a gap on Berden and a fading Driscoll.
With the front six riders all strung out riding solo, a race for seventh began as Knapp, Babcock, Mitchell Hoke (Clif Bar Development) and Cody Kaiser (Cal Giant/Specialized) formed an allegiance of young up-and-comers. Going into the ninth lap, Knapp’s head visibly sunk as he fell off the pace of the others. On the opposite side of the course, Berden clawed back to Powers, setting up a possible sprint for the podium behind Trebon and Johnson.

Powers had no interest in taking big Berden in a heads-up sprint. After the bell, he dug deep past the pit and onto the tennis courts. By the time he hit the gravel road behind the park’s maintenance building, Berden sat up and conceded the last step on the podium to Powers.

Compton makes it two in a row. ©Jeffrey Jakucyk

Women’s Pro Race
After falling during warm-up on a slick corner just past a 10 meter mud pit, Katie Compton may have made up her mind to take a more tactical wait-and-see approach to today’s race. Caroline Mani (CC Etupes Le Doubs Pays De Montbeliard) took the hole shot for a second day. Determined to make it her race, French National Champion Mani drove the first half of the first lap making an initial selection of what turned out to be the 2010 USA Worlds Team on her wheel: Susan Butler (River City Bicycles/Ridley), Meredith Miller (Cal Giant Berry Farms), Kaitlin Antonneau (Cannondale/CyclocrossWorld), Georgia Gould (LUNA) and Compton.

Compton wouldn’t show her cards until the end of lap three, happy to sit on the back of the train. So it was Butler who attacked near the end of the first lap between a torn up gravel access road and a set of steep undulating hills near the park’s pool. The move immediately put Gould in danger and whittled the group to five at the front: Butler, Miller, Mani, Antonneau and Compton.

Miller Bobbles, Mani Pounces
Butler, admitting before the race that she felt tired from the Day 1 race, didn’t show it. She attacked again the second time through the tennis courts and immediately opened a five second gap to the four trailing. With Compton apparently confident with the small gap, Miller sensed trouble and went to the front to close it down. Halfway through the second lap, nearing the pit, Miller appeared to have a problem and fell back behind Compton. Gould took advantage and latched back on while Mani buried herself and closed the gap to Butler.

Butler drilled it again through the tennis courts on lap four, taking Mani with her and gapping Miller, Compton, Antonneau and Gould. Mani off the front sent up a red flag and Compton immediately went to the front and took care of business, reeling in both Mani and Butler. With another effort from Compton on the gravel road, the front split again. Compton, Mani and Butler were together with a gap to Miller, Antonneau and Gould.

Compton continued to push the pace with every lap, eventually gapping Mani and Butler by five seconds, then 10. On the bell lap, Mani, maybe fearing Butler’s strong sprint, attacked through the technical turns near the pit and never looked back. Antonneau out-kicked Miller on the pavement to take fourth.

Compton and Mani talk about their race:
[youtube nW1OrFwlmdM 590 380] 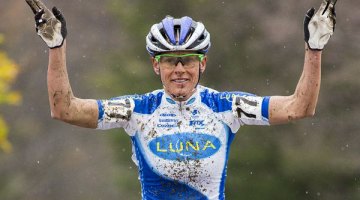