Professional athletes sure can eat, and given their choice of restaurants for a Monday night meal, the Telenet-Fidea professional cyclocross team opted to live large in Vegas with a Vegas-style dinner buffet.

Between their plates of food, the racers shared their impressions of racing and traveling in America with Cyclocross Magazine. (Don’t miss our conversation with Telenet-Fidea cyclocross star Tom Meeusen.)

The team is filled with fast learners who were already citing the saying “what happens in Vegas…,” but they kindly took exception to that philosophy to talk with us about their experience on this trip to the States.

Prior to Vegas, the team held a training camp in Boulder, Colorado. Here’s some of the highlights from our dinner conversation with some of the team’s riders: CXM: What are your impressions of CrossVegas?

Niels Wubben (NW): It’s different. Faster, smoother, compared to Belgium where there are 90 degree turns, but more or less there’s a little of everything, like stairs, a little bit of sand, and barriers. And there’s the special U.S. thing, where there are [offers of] slices of pizza, or beer, or dollar grabbing. That’s something you don’t see in Europe.

CXM: What about Las Vegas?

NW: Vegas is different. In Boulder for example, they are more bike-minded themselves. We saw quite a few dads, or families with kids, that come to us to chat because the boys or girls do cyclocross themselves.

Over here [in Vegas] nobody knows about it. The employees in the hotel, they see us with boxes, and they have to ask, “what are you here for?”

They can read “cycling team” on our shirts, and guess that there will be bikes in the boxes. But they have no idea.

It’s so different, because Tom [Meeusen] can’t go anywhere without being recognized in Belgium. Over here, he can do whatever he likes, because nobody knows who he is.

Thijs Van Amerongen (TVA): In Louisville it was a special crowd. Giving pizza, beer or a dollar. They were cheering for everyone, not just for the first one, but also for the last one. CXM: What’s the hardest thing about coming this far to race?
TVA: Jet lag, temperature, heat, and riding in the evening. We had a training camp in Boulder, so we are used to this time.

CXM: Did you guys get a chance to play tourist at all?
TVA: Yes, in Colorado we got to see Pikes Peak, and the Garden of the Gods.

CXM: Any funny stories?
Group: What do they say? What happens in Vegas, stays in Vegas?
Ellen Van Loy (EVL): I was walking down the street next to my husband, and people gave these cards with girl photos on them to only him, not me! I was right next to him!

CXM: Coming this far for a cyclocross race by plane, without your typical trailers and motor homes, what equipment compromises did you have to make?
TVA: We only take the normal tires, the Grifo XS, and the diamond tires, and no Limus tires. No Chicane. Two bikes, four wheels.

CXM: If this was a Belgian race?
Jim Aernouts (JA): We’d have a few more wheels. Eleven sets per rider.

We’d have a few more. Eleven sets [of wheels] per rider.

EVL: It’s the biggest challenge for all European riders here in America. Outside of our comfort zone, natural habitat, we get out of the airplane with two bags, boxes and wheels, we have to rent a car we have to get a hotel, we have to make appointments to get to the course.

We are not used to this life. We have to stop complaining.

Not that we’re complaining. It’s so far for everyone. There are a lot of Americans who take the time to come to Belgium with always the same situation. It’s my personal opinion [that] they don’t complain it. They just handle it. “I have two bikes, four pair of wheels, I have to make choices.” When it’s the wrong choice, it’s just bad luck. So we have to deal with it like that.

CXM: Does this give you more respect for the Americans who come over to race?
EVL: For me, it is. Really Really. I think so, for me.

CXM: Is having a World Cup in Vegas good for the sport? Traveling so far to such a place?
TVA: Maybe. The sport is getting more international by this sort of race. Maybe we have to wait five years [to see]. If there is still a World Cup in Vegas then, then it’s a good sign. If in one or two years it’s gone, then maybe it’s not bringing anything.

The level in America is getting higher I think. So maybe you get two courses, in Europe and America. That could be good. Maybe early in the season, we have five races in American, not only one. Then it would make sense for all the riders in Europe to come here. 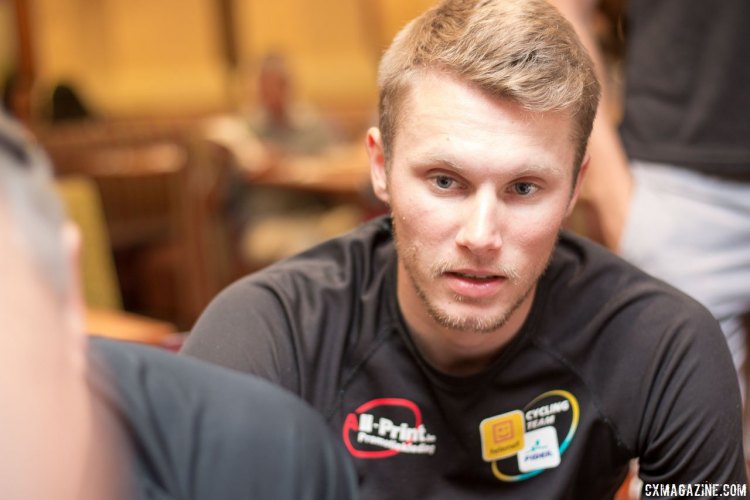 CXM: Any changes on the bikes?
TVA: Challenge tires, and Forza wheels.
EVL: I’ve been riding Challenge for two years now…they were a private sponsor [in years prior].

CXM: Any predictions for the races?
EVL: I have some kind of plan, but no, we will see. It’s the same for everyone. We’ve been here for almost three weeks, but it’s a surprise for everyone. What will the body do with the time difference? I’ll be really happy [if] I’m on the podium.
JA: Wout van Aert will probably win. He’s the best. Last week he won a road race, so he’s in good shape.

CXM: What result would make you happy?
JA: Top ten, best case.
TVA: Top eight.
Toon Aerts: I already saw the start list, I did some calculating and top twenty would be great. It’s my first year in the Elites.
NW: I don’t have a place…if I have a good race, I’m happy. That could mean a good result, or a little bit less, but if I think I did all I could, then it’s okay. But if I make mistakes, or have troubles during the race, I’m not that happy.

CXM: What do you expect with Nys’ last season?
NW: He always wants to win. And now it’s his last time, so he’ll want to stop with a bang, stop on the highest level possible. We’ll probably see the big Nys he’s always been.

CXM: Best of luck in the races, and thanks for making the trip!