Wisconsin cyclocross returns to Angell Park, the site of the former USGP Sun Prairie on Saturday, October 28 for the Cross Fire cyclocross race.

The new race, put on by ghostest with the mostest L5 Racing, will also be a preview of the Midwest Cyclocross Championships being held the second weekend in December. That event will likely have snow. Snow in October? It is Wisconsin, so you never know. 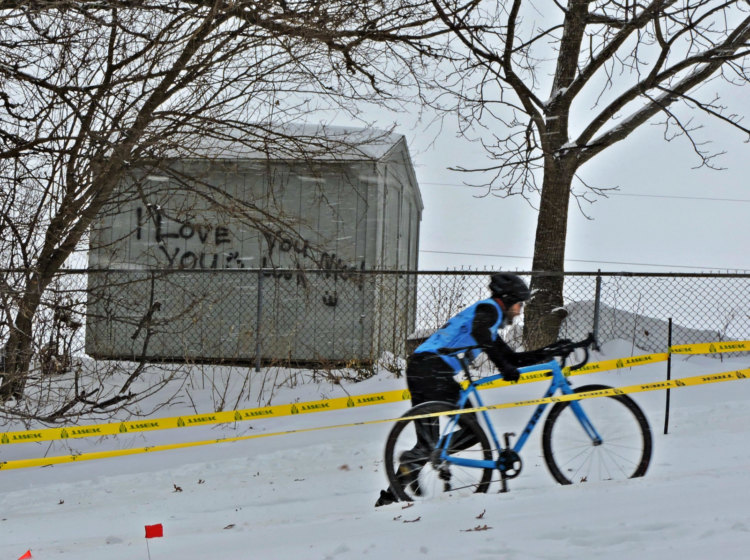 The scene at Angell Park in Sun Prairie is very friendly, despite the Halloween theme. photo: courtesy

L5 Racing chose Angell Park because it is a spooktacular venue for hosting a cyclocross race.

“Angell Park is a fantastic venue close to Madison,” said the team’s Fearless Leeder, Lee Unwin. “Lots of Wisconsin folks loved the USGP and with the race track, it’s got a lot to work with. Plus, it’s private land, so rain or shine, we will be racing.”

One to Ghoul at Cross Fire

Cross Fire is part of the Wisconsin CX Series presented by Trek. It will also be the official unofficial Wisconsin Halloween cyclocross race.

Halloween Cross was traditionally held at Washington Park in Milwaukee, but after two straight years of rain, including a cancellation last year, the race has been sent to the graveyard in 2017. Halloween costumes are in this fall at Cross Fire. photo: courtesy

Unwin said he is excited about the Halloween theme. “This will be a great chance to bring back some of the Halloween fun. I am personally working on my Rich Weiss costume. Also, there will be a coffin to boo-ny hop and of course, CROSSFIRE!”

L5 Racing will also be providing a $5 first-timer special. All first-time racers can try a cyclocross for just $5 with a USAC license (non-license holders will have to purchase a $10 one-day license). Registration for first-timers is day-of, beginning at 8:00 a.m.

Team Skills Guru Travis “The Chainsaw” Gruchow will also be conducting an intro clinic beginning at 8:15 a.m. The clinic will cover starts, barriers and some cornering basics.

Said Gruchow about the clinic, “I love getting the chance to work with new ‘cross racers, so it will be fun.” He added, “Hopefully we will have to get to important skills like ripping off-cambers and getting a little rad. It’s never too early to learn.”

Cross Fire is one of two races being held in Sun Prairie this weekend. The Brazen Dropouts will be hosting the traditional Sun Prairie Cup at Sheehan Park just down the road on Sunday. Overnight camping with fire pits will be available at Angell Park for riders racing both days.

Refreshments will be provided by Paoli’s Hop Garden, which is making a return appearance after last week’s Fitchrona Cross Omnium.

Food will from the El Coqui food truck will also be available. Om nom nom, as they say.

Registration is open through Wednesday night on USA Cycling’s website. There will also be day-of registration for an additional $10.

Information about the race is available on the race Facebook page.