Proud and Amazed: Dani Dance, Founder of the SSCXWC Madness

CXM: What do you think about the event over its first six years? There must be a great sense of pride to see the growth of the event.

DD: I absolutely love to see how this event has grown! It is amazing and I am super proud of it. I think it was the right decision to keep it in Portland the first three years because it built a lot of momentum, which I think helps. It is so fun to see the different cities put their own mark on it. I guess part of me always knew this race had potential to become a big success, but it still blows me away how much it has taken off.

CXM: What are your thoughts on the race moving around? I have a toddler and imagine it must be somewhat like seeing a child off to school for the first time. Any plans to bring it back home?

DD: I have a toddler too! I had her the first year it moved, which was good timing because there is no way I could have planned this race with a newborn. I think that the race moving around is perfect. It’s exhausting just thinking about planning that every year. This way the race gets fresh ideas and is accessible to more people.

I would love to eventually bring it back to Portland. We will have to win it back at some point. Maybe for the 10-year anniversary? CXM: If you were doing it again from the beginning, would you change anything?

CXM: SSCXWC coverage always focuses on the fun of the event—the costumes, the obstacles, the atmosphere. And rightly so. That’s what gets folks excited and talking. But what do you think about the racing itself? Or is it all about the experience?

DD: The first year we had this race, we had call-ups and called everyone up by fastest times in the previous day’s time trial (similar to what they do now for Nationals). As soon as everyone was lined up, we told everyone to turn around, putting the fastest guys in the back row. 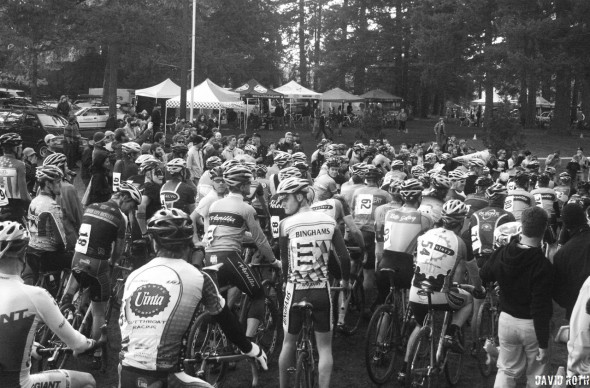 The second year we lined everyone up in one single row: 250 was a big front row. The third year, we put everyone in a huge field half on one side half on the other side with their bikes in the middle and a bagpiper playing in the background. Braveheart style. These starts gave everyone a chance at the title. We had amazing coveted prizes. Our mission was to create a race that was more fun then anything anybody had raced. It’s a hard balance. Ultimately it is up to the participants. Some race hard and some party hard. The key for the promoters is to provide both. Dani Dance loves the costumes that were present from the beginning at SSCXWC 2007, but doesn’t think they should be required. © Cyclocross Magazine

For example, I don’t think costumes should be mandatory, but they are a lot of fun and add to the atmosphere of the race. I do think the unpredictable obstacles are a big part of this race and I love seeing what other promoters come up with. I also would never want to see this race become some elitist race. I think the key is striking a good balance. That has been the great thing about these races. It attracts top-level athletes so you still see a battle at the front of the race, but everyone is having an awesome time and keeping it fun. Some of the top-level athletes have had the best costumes. I love that!

CXM: What’s your best piece of advice for the new SSCXWC spectator and racer out there?

DD: Prepare to want to go next year! This year’s race promises to be big.