In downtown Los Angeles yesterday, tourists and pedestrians may have been confused by the guy rolling by on his ’cross bike in a hot dog costume, turning into a junkyard. Ditto when the popcorn-costumed guy did the same. And when the women in kits and tutus started rolling in… well, it was obvious that something was up. But then again, it is Hollywood.

And thanks to New Belgium Brewing, yesterday, cyclocross came to Hollywood as the company shot scenes for an upcoming commercial showcasing—at least in part—our niche sport. The theme? What other than Bilenky Junkyard ’Cross?

This CXM reporter was able to get on set and help be part of the madness, from the costuming (a tutu, provided by wardrobe) to rolling over a (much safer) car ramp similar to the one at Bilenky. Also on set was Dorothy Wong, SoCal Cross promoter and casting director, courtesy of her past experience working in Hollywood, as well as just-flown-in consultant Dave Pryor, the promoter of SSCXWC and Bilenky last December. His trademark Bacon-patterned suit stood out in filming as he served as bike wrangler and race starter during shooting. Featured racers included Amanda Nauman of SDG/Felt, who will be featured in our upcoming Issue 24, as well as yours truly from CXM. 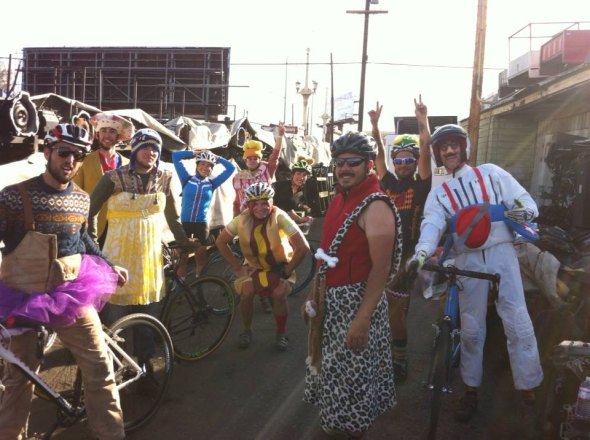 CXM taking to the ramp in style. © Peter Glassford

A little silly, sure, but anything that brings cyclocross to the masses is great for our sport!