Apple Trees, Parking with the Stars, and Mexican Pizza – A World Cup Perspective by Christine Vardaros 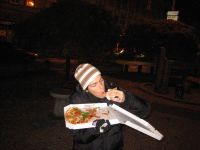 Cyclocross Magazine columnist Christine Vardaros, a regular print mag contributor, sent us this online report of her recent World Cup in Tabor. Enjoy her unique perspective of the day as a racer, journalist, and fan. You can read her first online installment of the Kalmthout World Cup here.

Leading up to the Tabor race, my excitement steadily grew – partly in anticipation of the actual race and partly because I had never been to Czech Republic. I always wondered what it was like in that part of the world. Well, it surely didn’t disappoint.

The drive from Belgium to Tabor felt quicker than it was. It took six hours of sitting in the car. The other four were spent passed out on the blow-up mattress in the back of the van. To make my nap even more luxurious, Jonas kindly blasted the heat so it would reach me in the back. When I awoke, Jonas was stripped naked with a steady stream of sweat running from his forehead all the way down to his waist. I guess what they say is true…luxury does come at a price. 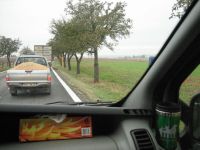 As we entered Czech Republic, two details became apparent. One was that there are more apple trees there than anywhere else I’ve visited. Most of roads we took through the country were lined with apple trees. The other thing I noticed was the obvious absence of highways. We, along with many oversized trucks, had to take tiny roads. Passing other cars was nearly impossible as two cars oddly parked across one of the tiny roads proved. Glad we weren’t there for that head-on collision.

Eventually we arrived in Tabor. I expected it to be a big touristy cosmopolitan town since they are hosting a World Cup and are somewhat close to Prague. In contrast, Tabor turned out to be a relatively small town that contained maybe five people who spoke ten words of English between them. Even finding someone who spoke German was a stretch. As odd as it sounds, this fueled my excitement! As a native English speaker, it is rare to visit a place where English is not spoken. It gave me a great opportunity to work on talking with my hands. Just picture me asking the hotel staff to hold the ham and cheese on their standard breakfast plate of bread, ham and cheese without the help of a menu or actual food to use as a prop.

Shortly after our arrival on Friday, we checked out the course – one day before mostly everyone else. The course was only half marked, so we had to use our imagination for the rest.

As the sun was almost set, I stopped to take a photo of the lake in the middle of the course. When I got back on my bike, Jonas was nowhere in sight. For the first few minutes, I kept calm. There was nothing I could do. Even if I could find our hotel located 3km away, what if Jonas is not there? Do I ride back? Will he still be at the course? What if he is at the hotel and I wait for him at the course?

But then the sky quickly turned black and I started to get cold and nervous. Ten seconds into my self-pity attack, Jonas showed up. It turned out that he had briefly ridden off course to locate the host hotel that was supposedly nearby. By the time he returned to the course moments later, I had already started another loop thinking he was ahead of me. Next time we will surely carry our cell phones to spare that one tear that escaped. 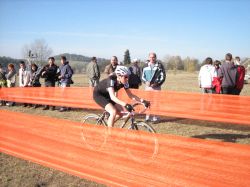 Usually the most exciting part of race day is the actual race. This time around, it was not true for me since I knew well before the gun sounded that my performance was going to be disastrous at best. I am in an extended overload training period that includes a few races; unfortunately Tabor is one of them. Although ill-timed, the overload was needed to boost my fitness to the next level.

The highlights of race day were actually our parking spot, the pre-ride and our evening’s festivities. Our van was sandwiched between the mobile homes of Bart Wellens, Erwin Vervecken, Bart Aernauts, Sven Nys and Daphny Van den Brand. Every time I came back to the van, Jonas had a different supporter to the stars as a chat buddy. On one of my swing-bys, Jonas was talking with Bart Wellens’ dad. As I pulled up, he asked me a question in Flemish. Immediately Jonas turned to me and cringed. I’m sure he was thinking, “Oh no. Come on. You can do it! But if you can’t, that’s ok too but I hope you don’t screw it up.” I figured he’d be thinking this because Flemish often sounds like, “DadadadaDAT, DadadadaDAT, DadadadaDAT” because I am still learning the language. When you mix in a dialect at rapid conversation speed, I can easily get lost. But this time I was actually able to respond. SCORE! Thankfully Jonas didn’t congratulate me in front of him.

As I was riding around the course for the pre-ride, it was again a star-studded event. I got head nods and hellos from a bunch of my heroes like Hanka Kupfernagel, Sven Nys and Bart Wellens. But the most memorable greeting of them all came as a complete surprise. A guy came up to me from behind calling me by name. I looked over, expecting to see someone with whom I am familiar but instead the World Champion Jersey was staring back at me. Yep – Lars Boom. I have no idea how he recognized me since, aside from the periodic head nod, we’ve never formally met before. He wanted to talk about setting up the interview for Cyclocross Magazine that I had emailed him about recently. What was even more surprising about the experience is that Lars spent our whole conversation asking me about myself and my racing instead of talking about himself – true class.

After the race, we took a walk into town to spend our leftover money. We found a Mexican pizza restaurant and ordered a billion items on the list, figuring a portion of them will come back edible for our vegan palates. Fewer than we thought were actually edible so we ordered an extra pizza to go and ate it on our walk home while speaking in Czech; just add a “skee” to the end of every third word in a sentence and you too can speak the language.

This weekend I will be in Germany for a race in Magstadt (http://www.rv-pfeil-magstadt.de/) on Saturday and Lorsch on Sunday. I will still be in overload training so we’ll see how it goes. Thanks for reading.