Standing there next to the spot where Amy Dombroski lost her life exactly one year ago simply broke me all over again.  But being surrounded by those who continue to be inspired by her put my grief back into perspective.  It is not every day where a person – living or dead – has this much positive worldwide impact.  While we all stood there with heavy hearts, we celebrated who Amy D. was, what she’s accomplished, and where her passions lied. Many folks talked about their personal experiences with Amy, I read some of her poems and when it came time to hold a minute of silence, magic happened. On that very busy road, traffic was somehow halted for the full minute…complete silence. Flosh Goyvaerts, organizer of this event as well as owner of ‘t Hoekske Café (Heist-op-den-Berg, BEL) where Amy was to have her first supporters’ club, wrapped it up with his formal announcement of how he plans to continue to keep Amy D.’s name alive as well as her passion in raising awareness and support for women’s cycling.  In addition to his permanent “Amy Corner” in his café where a collection of her race clothing and news clippings is prominently on display, and his sponsoring of a cycling team with “In Memory of Amy Dombroski” printed on the jerseys, he will be holding a yearly skills clinic for kids 12 and under starting October 3rd, 2015.  Lastly, he announced that the café will continue with their support of female racing by becoming the official supporters’ club for fellow Telenet-Fidea racer Ellen van Loy.  Ellen also came to cycling from another sport.  While Amy’s first love was skiing, Ellen’s was volleyball.  These two gals also share their adamant support for fellow female athletes, a rare quality to find at the top end of the sport.

In addition to sharing Amy’s supporters club, Ellen also began motorpacing with Emiel van den Broeck, the man who was with Amy on that fateful day.  Emiel was also the one who went with Amy to all the races.  As he thinks back to that fateful day, he still has no answers as to how he could have done anything differently to have avoided the tragedy.  The motorpacing session began just as it always does with all his pro riders, where Emiel went over the collection of usual warning signals so racer and scooter are in sync.  Before the narrowing of the road where she died, he did his usual warning signals to Amy to let her know to take the speed down and go around the right side. Maybe it was from the setting sun that she didn’t see what was coming? He just doesn’t know.  He is one of the known and trusted guys in Belgium to motorpace behind so it still remains a mystery how it occurred. Simply bad luck in my opinion, certainly with nobody to blame. I personally have had many near misses while motorpacing under the safest conditions possible – as well as while simply riding my bike alone.

After the ceremony, we traveled the few kilometers to ‘t Hoekske Café to properly toast Amy D., share more stories about her, as well as toast Ellen who is honored to be sharing the café with Amy.  Somewhere between drinks number 2 and 3, I heard Flosh propose an increased incentive for Ellen to nail that top podium spot.  “With every win, you get a keg,” he said.  I’m surely looking forward to helping crack open that first keg with Ellen and the gang…in the Amy D. corner naturally! 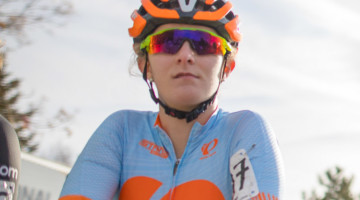