Haley, shown here from two years ago, had a great showing in Milton Keynes. Photo by Kent Baumgardt

A week after rising star Gage Hecht took an amazing win at the Junior Belgian race in Koksijde, fellow American Gavin Haley followed the success at Milton Keynes, dominating the race with a lead of nearly 30 seconds ahead second place Arthur Green.

The future for American cyclocross looks great. Haley entered the day against a roaring tide of a nearly an all-British cast, with only he and David Conroy of Ireland as the potential spoilers of a home county hero taking the win. 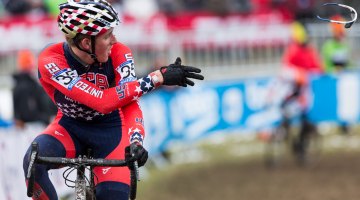