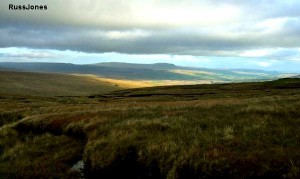 The Three Peaks event has been long enough to be called a classic and, not surprisingly, it’s evolved quite a bit over its 48-year history. Throughout, however, although it’s a long way from a one-hour, full-throttle effort, cyclocross has been at the heart of the super-challenging long distance event. For more info on the event, see Dave Haygarth’s feature in Issue 4.

The 48th Three Peaks was played out on September 26 across the Yorkshire Peaks of Northern England.

The Three Peaks began in the late 1950s and has drawn riders from across the UK since its inception. Most of the off-road sections are out of bounds during the year, and even on race day bikes must be carried across the three peaks. All of this helps cement a special feeling as boundaries are opened up for ’cross riders to enable them to tackle some of the toughest tracks imaginable.

This area of Yorkshire features windswept moors and rock strewn paths, and as you climb, mist can engulf you in a moment, and the cold can cut through you like a knife. For the 48th edition the sun shone, but still the wind blew and riders were minded to be careful atop the peaks; people have been known to get blown off of them in the past. All competitors must carry a survival pack just in case…

Long gone are the days when some would position helpers along the route, and switch to an appropriate ’cross or road or mountain bike, each suited to the next section to be traversed. Now they must ride a ’cross machine only, but helpers still stand on the bleak moors with spare wheels or bike in hand in case of mechanical mishap. For many entrants much of the talk before the day is of tires. Those who seek speed will use racing ’cross tires, but experience has shown this to be a risky ploy, and the majority will pick a heavy and more puncture-resistant weapon to fend off the hard, sharp Yorkshire stone.

Although closed to cyclists for the year, fell running competitions are often held here, and it’s no surprise that fell racer Rob Jebb (more about him here) dominated the Three Peaks in the modern era with eight wins. With so much of the course extremely hard to pedal and some 6/8kms unrideable, a good runner can gain time over the other cyclists. Second-placed Nick Craig is a past UK mountain bike champion, and he was to lose just over three minutes to the winner. 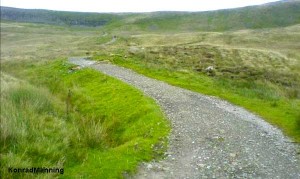 Plan on three to four hours of this © Konrad Manning

Current top-line ’cross riders tend to steer clear of the event – the Three Peaks requires special training and taking part can compromise a whole season. Many do take a shot at the race later in their careers, and the race entry featured a number of past top UK riders, such as ex-national champion Barrie Clarke, and ex-world champion Erwin Vervecken did mention to us sometime ago that he fancied having a go one day.

London, UK, rider Simon Scarsbrook of Mosquito Bikes/LondonCycleSport, finished 223rd with a time of 4:27:57 and summed up his race: “Didn’t have my best race, I was behind with training, but was descending better than normal, until coming down Pen Y Gent lane behind a Cardiff (Waes) rider I hit something on a bend and went down quite heavily, so finished mudded and blooded – the usual really! Followed, at the finish, by an amusing half-hour whilst the mountain rescue medic removed a stone the size of a pea – I kid you not – that had embedded in my knee. I can barely walk today!”

Simon also told us that, “Fred Salmon (three-time winner in the 90s) jumped out on Jebby at the top of Penyghent, the shock of which sent me over the bars – Fred was naked apart from a blond wig!”

“I cannot even tell you how hard this is, but it’s really amazing. Three huge climbs, awesome descents, breathtaking scenery and a really good atmosphere. At the time I swore I would not be doing this again but I’m already planning for next year.”

Next post Scherz and Van Gilder Charging Through The MAC