Video: Sophie de Boer Describes her World Championships, Hoogerheide and the Remainder of the Season

Cyclocross Magazine’s Christine Vardaros spoke with Sophie de Boer of The Netherlands after the midweek 2016 Parkcross Maledgem race where she finished second.

De Boer described how her race at Worlds played out, her winning ride at Hoogerheide and her second-place finish at Parkcross Maledgem and shared her schedule for the rest of the season:

On her ride at Worlds:

It was a good hard race. very exciting. We were four in the front and then in the last lap Thalita joined us. I think nobody really expected her.

On the first five [laps] I felt really strong and I had a bit of a gap on Sanne [Cant] and on the last lap she joined me and made some mistakes.

Race Results: No Rest for the Weary at 2018 Brico Cross Parkcross Maldegem 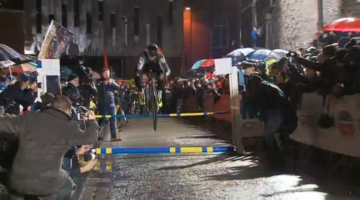