At the 2016 Soudal Classics stop at Jaamarktcross in Niel, Belgium, Sanne Cant (Enertherm-Beobank) followed Ellen van Loy (Telenet Fidea Lions) for two laps before setting off on a solo run to take the off-camber-filled race. The cyclocross "Spiral of Doom," often seen at American cyclocross races, made its appearance in Niel as Belgium celebrated Armistice Day, creating a rare, flat surface on the hillside off-camber race. The Spiral of Doom made its way to Europe for Jaarmarktcross.

Van Loy started off strong, stringing out the group with only Cant able to stay in touch. Van Loy rode conservatively, running most tricky sections, while Cant tried to pedal her way up hills, along off-cambers and through corners. Regardless of their approach and Cant's brief tumble on the second lap, the two stayed together for until on the third lap, Cant opened up a gap that Van Loy couldn't close. Sanne Cant at the 2016 Soudal Classics Jaarmarktcross in Niel. © B. Hazen / Cyclocross Magazine

Behind, Van Loy's teammate Jolien Verschueren had a rough start, crashing at the barriers and hitting the deck on several off-cambers. Still, the diminutive school teacher was determined to pass the test, and with big strides, closed the gap on the running sections to catch Van Loy and leave her behind on the final lap. Sanne Cant takes the win for the Women's Race at the 2016 Jaarmarktcross in Niel. © B. Hazen / Cyclocross Magazine

See below for the full results and photo gallery. See the Men's 2016 Jaarmarktcross race report, photo gallery and results here. 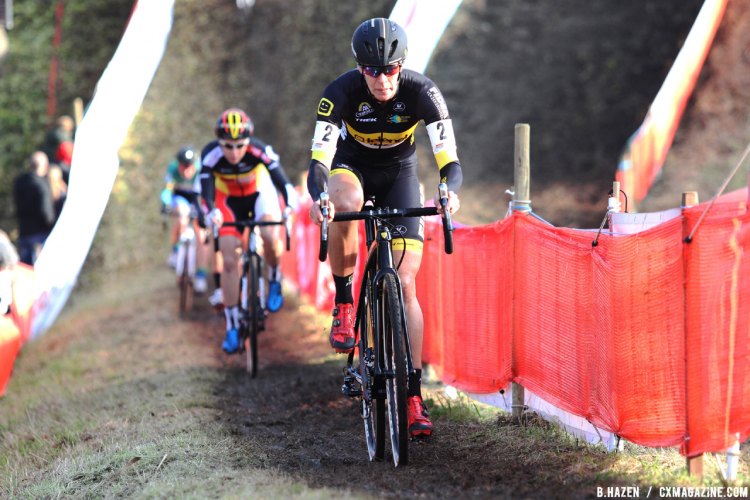