Happy New Year! We hope 2015 brings you the very best in health, happiness and cyclocross, and Cyclocross Magazine will do our very best to make sure at least the third part comes true.

To start the year off on that note, we’ve got a 2015 Cyclocross National Championships course preview video for you today.

Watching the unofficial course preview of the USA Cycling Nationals course in Zilker Park in Austin, Texas below, two things caught our eye: 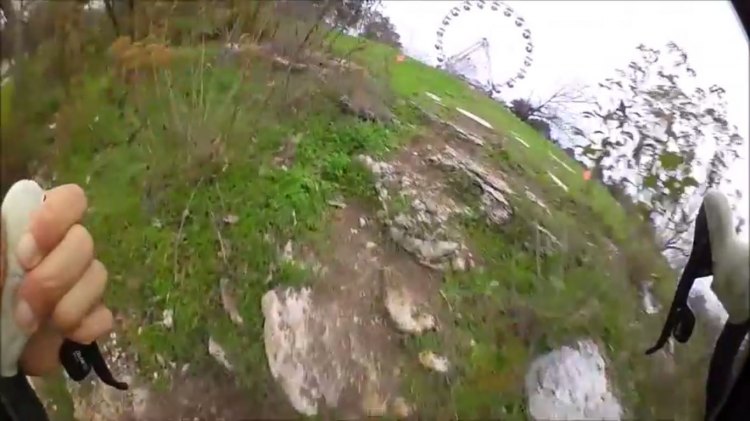 Two things that caught our eye: the Ferris Wheel and the narrow, jagged limestone stairs.

And the limestone staircases.

At first, we were quite excited because our first thought was we know where we’ll be watching the races from, even if we have to buy a ticket to get an aerial view. But we were bummed to learn that the controversial Ferris wheel (complete with a Facebook page opposing its existence), won’t be available to lazy cyclocross fans looking for an amazing vantage point during the National Championships. The ride was part of Austin’s famous Trail of Lights that ended December 21.

The limestone stairs will be there, however. They’re “natural” and look to to be narrower and more jagged than stairs magically hopped by Cody Kaiser and Maxx Chance at the 2014 Cyclocross National Championships at Valmont Park in Boulder, Colorado. Could people still ride them? Possibly, but at great risk, and probably not faster than one can run them.

Update: The lower part of one flight is being normalized via wooden stairs:

Other points of interest highlighted by the video are the “dirt downhill” that doesn’t yet have dirt (and had to be walked), and the numerous “Hop Hop” road crossings that will either be sandbagged for easier ride-over ability, or be a true test of curb hopping skills.

Racers who contested the 2014 Cyclocross National Championships at Valmont Park in Boulder, Colorado will likely note that this year’s course looks quite flat in comparison to last year’s hilly venue. This year’s promoters estimate that the course offers 100 feet of climbing per lap.

In studying other maps of the area, we noticed one other convenient feature of the venue: two Austin B-Cycle bike share stations. Flat your pit bike in course recon? Swipe your credit card and in seconds you’ve got yourself a spare bike. But don’t blame us if it doesn’t meet USA Cycling National Championships restrictions.

Enjoy the partially accelerated course preview video below. What are you thoughts about the course? Drop a comment below. See you in Austin?