Thijs Al All Healed Up and Ready to Go…Almost 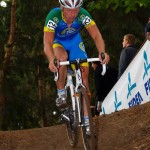 While Netherlander Thijs Al (AA Drink) may have the form of two years ago, when he won Scheldecross and immediately afterward the Zolder World Cup, a nasty cold has kept his legs from showing what they can do. He competed last weekend in his first two races of the season – at Hardewijk, Netherlands, and Neerpelt, Belgium. Both ended with modest results of ninth and 23rd, yet the discomfort he experienced was anything but ordinary. Al explains, “In Harderwijk the cold got stuck in my back. I found this out in the warm-up when I was pushing it. Between my shoulders it was really tough, then my lower back also hurt a lot in the race. It was so strange to ride the power sections with no power at all. I felt like I was just turning the pedals without pushing on them. On top of that, I can’t breathe really well. I was coughing nonstop after the race.”

Al continues, “[Neerpelt] was a little better but it still wasn’t OK, so again I felt my back. I put warming cream on it and it was a little bit better with the hard efforts.”

Thanks to his successful off-season training, he knows the races will go well shortly. “I think when my cold is over,  I am in good shape because the road races went really well. I did Druivenkoers [a very heavy UCI road race in Belgium last month where he infiltrated the winning break ] really well, so I feel I have the power.”

It’s especially important for Al’s morale that his races come together soon as his last season was a bust due to injury combined with a bit of bad luck. “Last year I had a really bad crash just before the season started. I bruised my ribs so it wasn’t until the end of November into December until they healed. But at the end of November I broke my finger warming up on the Koksijde course. Last year, everything a rider could have, I had it. Even in the National Championships I crashed two corners just before the finish while I was in the leading position. That was really a shame.” He finished third on the day, behind eventual winner Lars Boom [Rabobank]. That win could have surely saved his season.

But Al has since turned his attention to the present. “When my cold is over, I hope to be back in the front again where I belong – where I was two years ago, just ride a solid top 10 every race.” He hopes to show off his form as early as this weekend in GVA Trofee’s opening round in Namen. With cold only temporarily holding him back, expect him to reclaim the “holeshot” for which he has become famous.