Roval was a French company that was purchased by Specialized 12 years ago. Decades ago, the brand was popular with road racers and triathletes due to its lightweight design and straight-pull bladed spokes, but not a favorite among some mechanics due to the uncommon spokes and hidden nipples. 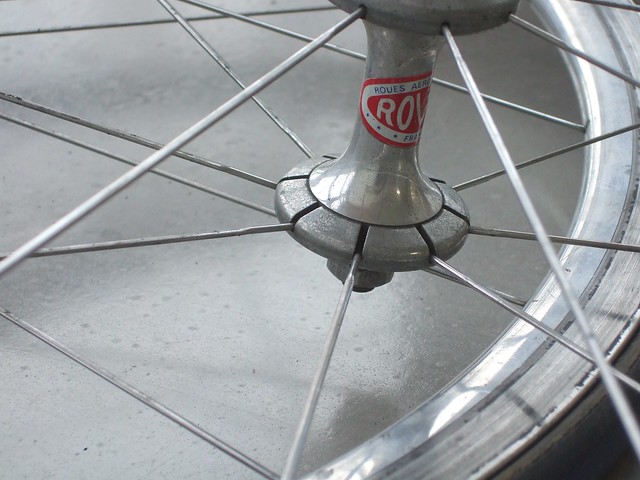 Specialized’s takeover allowed the wheel brand to become a household name again and leverage a lot of the Big S’s vast resources. As a results, Roval became known again for modern high-end aerodynamic wheels at the top end, but at the lower end, simply became Specialized’s “house brand” of wheels.

We’ve seen it before, with Fuji’s takeover of the Oval brand, but Specialized is looking to put a new spin on the storied French brand in 2017.

Because the wheels have been found mostly on Specialized bikes, the housebrand reputation has limited the brands’ appeal to other manufacturers. Roval is currently seeking to break out from the mothership, as the company feels it has built both a reputation and a product that is deserving of a larger market. At Sea Otter 2017, Roval’s presence was reflective of this goal, as the booth was nowhere close to the Specialized tent, and there was no big red S in sight. According to Specialized employees that we talked to, the first step is getting the word out that Roval’s products stand alone on their own merits and are available for purchase for riders to spec on non Specialized bikes.

The company was showing off its CLX 32 wheels, one of two sets ideal for cyclocross and gravel: The Roval CLX 32 is designed as a lightweight, tubeless-ready road wheel with an aerodynamic shape that is strong enough for cyclocross. 2017 Sea Otter Classic. © G. Kato / Cyclocross Magazine

The Roval CLX 32 was released this last winter and it can be found as original equipment wheels for Specialized’s Crux cyclocross bikes.

Employees pointed out that Roval now includes other brand of bikes in its company catalog, like mountain bike builders Evil and Transition as well as the road/cross brand VYNL. Specialized explained, “We know that the first step is getting the word out that Roval wheels are available aftermarket and ready for other brands of bikes. We don’t expect to be OEM on other manufacturers’ bikes right away.” For the $2,400 retail price, the CLX 32 offers plenty of options whether you are running disc or rim brakes and clincher or tubular wheels, but it’s still a major investment similar to Zipp 303 wheels and other competing products.

Need a deeper bling? You could try to roll like Cyclocross Worlds silver medalist Peter Sagan, on his CLX 64 wheels: Need some deeper bling? You could opt for the golden CLX 64 hoops of Peter Sagan. © Cyclocross Magazine

See the full Roval CLX specs at the bottom of this post. The Roval Control SL 29 is a brand new wheelset that is lighter and wider than Roval’s current 29er offerings and comes with a retail price of $1,900. 2017 Sea Otter Classic. © G. Kato / Cyclocross Magazine

Roval was also showing its brand new carbon 29er wheelset called the Control SL 29 that is an extension of the current Control 29 line of carbon mountain wheels, but with a lighter weight and a wider rim. The inner rim width is 25mm to help fit the wide tire of your choice or add volume to your narrow tire.

The extra width and gram savings (and 54-tooth Star Ratchet freehub) come at a premium though, as the SL model retails for $700 more than the carbon Control 29 and $400 more than last season’s Control SL 29. That’s approaching $10 per gram savings over last year’s model, or more than $100 per extra mm of width. That’s a big jump. However, Specialized/Roval’s rolling resistance tests indicate that wider rims are faster with the same tire and pressure. Can you put a price on extra speed?

If your answer is yes, Roval might still have an option for you, with its $600 alloy wheelset, the 1550g Control 29 with a 21mm internal rim. You still get the Zero Bead Hook design and DT Swiss internals, but they’re from the 360 hubs, not the 240s.

As with most carbon mountain bike wheels, we’re sure the Roval hoops have maximum tire pressure limits, but Roval representatives didn’t have that data available on hand, so you might want to check before purchasing and then pumping up your 40mm slick to 80 psi  in attempt to chase the roadies (not that there is a reason pump them that high).