The Round-Up: The Season Kicks Off at Nittany

In our new column, The Round-Up, we’ll be looking at the races that happened across the country each weekend and adding our two cents.

The first UCI race of the season went off without a hitch in Pennsylvania in the shadow of the Trexlertown Velodrome. Todd Wells surprised the crowd—first, by showing up to race, since he’s typically still in the midst of MTB season—and second, by not immediately flying off the front and trouncing the cyclocross racers on course. The multiple-time National Champion and three-time Olympian showed up to the season early in order to secure points and to open up before CrossVegas. He raced Nittany and will race in Vermont this coming weekend before heading to Sin City, and while the UCI points that he’s accumulated in these two weekends won’t change his starting spot there by much, they will come in handy for a Nationals call-up in his home state in January. He’ll be taking a break after Vegas, then returning to the MTB before coming back to ’cross in late November. We’re excited to see how he stacks up against competition like Sven Nys at CrossVegas.

It wasn’t too surprising that Wells had company at the front of the race this weekend: the course was far from the technical trails that defined MTB Nationals in July, just a town away from where Nittany Lion Cross is held. The Nittany course is a serious power course and road racers (crit specialists in particular) were able to use their fitness to stay at the top of the race. While Wells was able to secure wins both days, both were hard fought, and since CrossVegas is also a power course, he won’t have an easy time staying up in a group with Nys, Powers, Trebon and all the usual suspects.

It was clear that the kinks were getting worked out for some racers like Justin Lindine, who suffered the first crash of the Elite season, and Jeremy Durrin, who raced Sunday but limped away after an early race crash. On the other hand, some racers like Stephen Hyde and Anthony Clark of the JAM Fund team had banner weekends. Hyde’s performance on Sunday staying in the lead group with a vengeful Lindine and Wells was inspired, and it will be interesting to see how he changes field dynamics as the season wears on. The Haymarket team was also out in full force, and two of them will be traveling to China for the UCI race on the 22nd, so seeing their performance after a 17-hour flight will be interesting.

In the women’s field, Laura Van Gilder’s dominant performance on Day 1 wasn’t surprising: She and Day were together until the final moments when Van Gilder took the sprint to the finish. No surprise, since Van Gilder is best known for her sprint, and has won Nittany four times. Arley Kemmerer’s performance was also noteworthy, as the C3 racer has really stepped up her game, taking the win on Sunday. She won an MTB National title this summer as a Cat. 1, and with her new Specialized Crux (stay tuned for a bike profile), she seems to be setting up for a great season. Nikki Thiemann, who took third on Sunday, also can’t be discounted for upcoming races, and Gabby Durrin (nee Day) is, as always, one to watch. Other women to watch this year included Kemmerer’s teammate Frances Morrison, JAM Fund’s Christine Birch and Colavita’s Stacey Barbossa.

The other interesting thing we noticed was that even the top racers were on last year’s bikes. After asking a few questions, we were able to ascertain that racers like Todd Wells, Gabby Day and Justin Lindine will be on disc brakes this year, but new bikes are just not ready yet. The Rapha-Focus team will be giving Day, McDonald and Powers new bikes in Seattle in time for StarCrossed, while Wells is hoping to get his new Specialized bike in time for CrossVegas.

Stay tuned as the CXM crew gears up for a week in Vegas before heading to China! 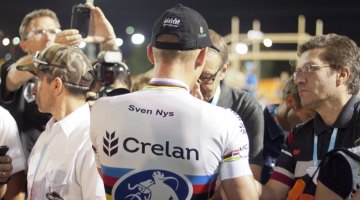