Rotor Bike Components has been busy developing a new hydraulic shifting system it is calling Uno, as well as a dual-sided power meter, built around one of the Spanish company's iconic cranks, called the 2INpower. Today we're sharing our (quite lengthy) initial impressions on the innovative Uno drivetrain and brakes, with our typical technical analysis from the perspective of a cyclocross and gravel rider. Stay tuned for more on the 2INpower system.

Why is hydraulic shifting low maintenance? “Hydraulic systems are already something we use everyday without thinking twice, in car brakes, construction equipment and airplanes,” said Carlos Cartón, the project’s lead engineer. If you still think using hydraulic systems to change gears sound sketchy and risky, know that modern automatic car transmissions have complex hydraulic systems. Hydraulic systems have obviously proved quite reliable for braking on mountain and cyclocross bikes, and most cyclists are bleeding their brakes less frequently than charging batteries or replacing cables and housing. 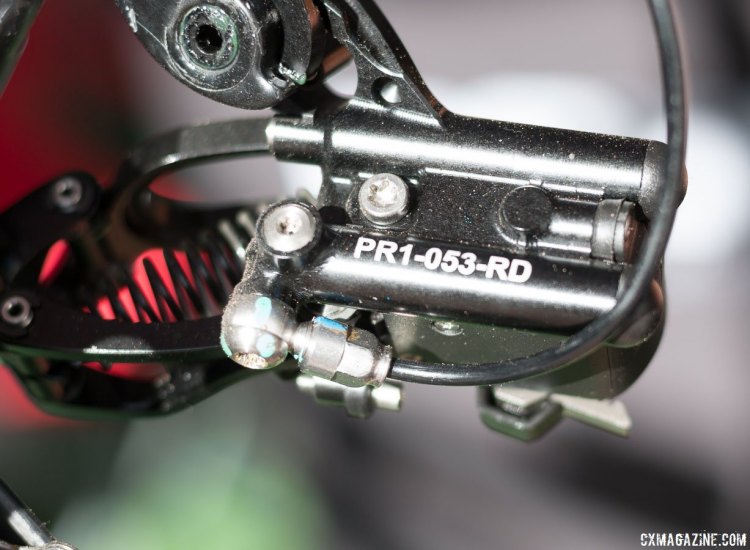 The bolt to the left of the lettering is the fill port for the 30% gylcol-based hydraulic fluid. Rotor’s Uno hydraulic shifting component group. © Cyclocross Magazine

Rotor’s Uno shift system may be more reliable and require less maintenance than most hydraulic braking systems, at least in theory, because it’s a closed hydraulic system. The closed system avoids the fluid reservoir found on open hydraulic braking systems, allowing for more precise actuation and less opportunity for air and dirt to enter the system. The downside is that it’s less tolerant of heat (a non-issue in shifting when compared to brake systems) and air bubbles. Compare hydraulic systems to mechanical ones with cables, and Rotor maintains the Uno system is lighter and lower maintenance. Heavy steel cables and housing are gone, and don’t need to be replaced after a muddy, nasty race. Compared to electronic systems, there’s no battery or batteries to charge, ever. With a dying Di2 battery, you lose front shifting first, then rear shifting, and eventually you’re stuck in one gear unless you get creative with your limit screws. With eTap, the components each rely on their own battery. You can swap batteries around to push the juice to where you need it most (between derailleurs), but there are four different batteries to manage, and any of the four can disrupt shifting. With Rotor’s Uno system, heaven forbid, put away your bike after a hard season, and don’t touch it until June? It should still be in peak-season form and shift flawlessly.

Is this the right system for cyclocross and gravel? See the next page.