The biggest challenge for disc brake and thru axle combinations is achieving a proper chainline as the use of both typically requires extra spacing for both the rotor and thru-axle mount. Add to that short chainstays like those found on many modern cyclocross bikes, and the shifting is theoretically compromised and outside of recommended specifications by drivetrain manufacturers. Heel clearance can also be problematic. Athough many manufacturers have built bikes with reliable shifting and no chainstay heel clearance issues with "standard" 142 or 135mm rear axle spacing, Specialized went back to the drawing board to design its own system to address these potential issues.

The Specialized's SCS system solves these theoretical issues with a 135mm axle (as compared to the typical 142mm thru axle), and a cassette that is mounted 2.5mm inboard to make it the same as the standard 130mm road spacing standard. They have offered their patented SCS as an open platform for wheel and bike designers to use as a new standard, but few have yet to jump aboard. As a result, Specialized riders aboard a newer model Crux have been, until now, limited to the use of Specialized's own Roval branded wheels.

SCS Crux owners can swap their derailleur hanger to work with "standard" wheels, but then their SCS-compatible stock Roval wheels that come with complete bikes would be rendered useless. NEXT wheels complete wheels, with or without their SCS conversion kit, are built around a carbon rim that should be good for tubeless conversion. © Cyclocross Magazine

NEXT Cycling, founded in 2015 by Vermont-based engineer and long-time Jonathan Page sponsor Jerry Chabot, is the first company we know of to produce a wheel kit for the 12X135 thru-axle design of the SCS rear end on the 2016 Specialized disc brake/thru-axle bikes. The kit includes a specially machined Ultegra cassette that slips onto the DT Swiss hub and custom hub end caps. The wheels help Specialized Diverge and Crux owners with SCS get ready for gravel season and cyclocross racing with a lightweight carbon tubeless option.

The 135X12mm spacing is accomplished by an end cap change on the hubs and the back side of the largest cassette cog holder is machined to allow the cassette to sit inboard an additional 2.5mm and, as a bonus for extreme weight weenies, saves two grams over the stock Ultegra cassette. Due to the bracing angle, a 28T large cog causes no real issue with spoke clearance. Next wheels conversion kit includes the use of a machined cogset for the upper range of a cassette that moves the entire assembly inboard. © Cyclocross Magazine

The rear wheel is 760 grams with a 25mm wide carbon rim with a 38mm depth, laced with 28 two cross with bladed spokes to the DT Swiss 350 Center Lock hub. The rim inner profile has a prominent bead shelf that will be helpful to reduce burps in tubeless use.

While the rims are molded overseas, NEXT Cycling builds the wheels here in the States:

"Laced up right here in VERMONT, #MURICA by local artisans in a gluten free environment."

If you've got DT Swiss thru axle hubs, and want to modify a different wheelset to work with your Specialized SCS bike, NEXT Cycling also offers the SCS kit by itself.

Stay tuned for our full review of the NEXT Cycling carbon tubeless SCS wheels. Photo gallery below the specs. 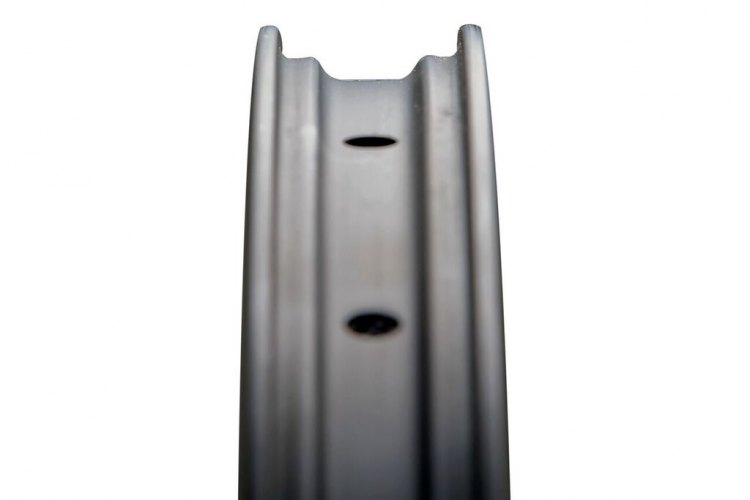 NEXT Cycling’s rim profile, without tape