Meredith Miller is Pretty in Pink for Breast Cancer Awareness

Meredith Miller represented the cause last year and took the win in Gloucester. © marcoquezada.com/nyvelocity

Meredith Miller, for the second year in a row, is putting on her pink skinsuit once again and fundraising for Breast Cancer Awareness, this year through a silent auction, t-shirts through Stomach of Anger and a raffle on BikeReg.com. She sat down to answer a few questions for Cyclocross Magazine, in between her European races.

Cyclocross Magazine: Who is doing the pretty in pink fundraiser? Just you, or more teammates?

Meredith Miller: Teal Stetson-Lee and I are both wearing pink this month to raise breast cancer awareness, but the fundraising has been my personal project.

CXM: Which races have you done in the pink kit?

MM: USGP Fort Collins and Plzen World Cup. I’ll also be racing in pink for the Tabor World Cup and the Boulder weekend.

CXM: Tell me a bit about the fundraiser — anything different from last year?

MM: The biggest addition to the fundraising effort this year has been the stomachofanger.com tees and jerseys. The guys at SoA are wonderfully creative, and their tees have raised a lot of money for other projects. I knew that if these guys would design and sell a tee, the fundraising effort would be bigger and better than last year. I approached Kacha and Michael mid-summer to ask if they’d be interested in donating to the cause. Immediately they were on board. Kacha and I talked about what I wanted, he went to the drawing board and the Pretty in Mud tees were born. Running with the same design, Pactimo came on board to do a pre-sale only run of jerseys as well.

SoA has been a lot of fun to work with, and I hope to grow a long term relationship with them.

CXM: How did the silent auction go?

CXM: Link to the stomach of anger shirt and bikereg page? 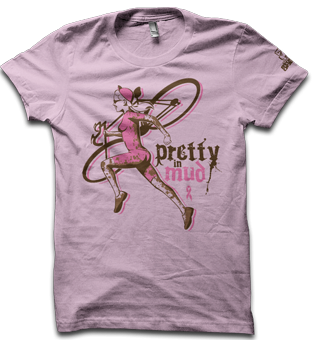 CXM: You’re racing in pink in Europe; do they have Breast Cancer Awareness month there? How have they responded?

MM: I just found out that October is also Breast Cancer Awareness month here in Czech and across most of Europe. There hasn’t been a huge response to my pink kit, because I don’t think most people have put two and two together.

However, Katerina [Nash] and I just wrapped up a press conference for the Tabor World Cup. They were very interested in the Pretty in Pink campaign and the SoA Pretty in Mud tees. I’ve given a few away and the announcer now has one to talk about during the live coverage of the race. Very cool! So, now I can say the response has been great!! It will be even more exciting to wear pink on Sunday now that there’s more buzz about it and people here in Czech know what it’s about.

CXM: Would you want a pro male cyclist riding in a pink skinsuit for the month?

MM: Might raise even more awareness! Absolutely! Many people might think that I’m wearing pink because I’m a woman so they don’t think twice about it. If men wore pink, a lot of attention and talk would be generated because it’s just not what most guys do. More people would ask, “why are those guys wearing pink?” Many men have mothers, sisters, and friends who have been affected by breast cancer, so why not wear pink, too?!

CXM: When you race in the pink kit, are you thinking about racing for Breast Cancer Awareness? Does it change how you look at racing at all?

MM: Most definitely. When I pull on my pink kit, I want people to know it’s for a specific reason, that it’s for breast cancer awareness, and that I’m not just being a girly girl. I want people to see my kit, to hear about what I’m doing, and take the time to think about a person they might know who has been affected by breast cancer and ask what they can do to help. Small gestures make a big difference.

CXM: Give us the details of the raffle: who, what, when, where?

MM: The raffle is being hosted by BikeReg.com. The raffle is part three of the fundraising efforts in addition to the t-shirt sales and silent auction. Last year, people who couldn’t be at the silent auction because they didnt live in Fort Collins asked me how they could get involved. The online raffle was the answer to that, and it’s back for another year.

The raffle ends this Friday, the 21st. All proceeds go to Hope Lives, a breast cancer foundation based in my hometown of Fort Collins.

CXM: What do you think other women cyclists can do to promote the awareness month?

MM: Laura Van Gilder rocks pink socks with her kit! Wearing pink — socks, kit, glasses, stickers, etc — and the ribbon is a great start. For me, this all started last year when my cyclocross team, California Giant Berry Farms, asked me to wear pink in October to support the company’s ‘pink’ campaign. I decided to run with it, to do more than just wear pink. I’ve been very fortunate to have strong relationships with many of the brands that are associated with the two teams I ride for (Cal Giant and TIBCO), and that they have been willing to support my efforts, oftentimes alongside the company’s own breast cancer awareness campaign. I bet there are many brands out there that sponsor women’s teams who support breast cancer and would be excited to have a rider promote their ‘pink’ product. It only takes a little time to ask a sponsor how to get involved, or even to get involved if they already aren’t somehow.