A Foreigner on a Belgian Race Schedule

“I must try your cookies first before I give you an interview,” responded Poland National Champion Mariusz Gil when he heard that his Baboco-Revor Team manager Steven Baekelandt scheduled him an interview to take place at my home – juice and cookies on the menu.

The 2009-10 season was Gil’s first time racing a full Belgian Team schedule which instantly increased his exposure in the European cyclocross scene . Even though in the years previous Gil predominantly raced closer to his home in Poland, he was no stranger to top competition, finding success as early as his silver medal in the under-23 category at the 2003 World Championships in Pontchâteau, France. Considering he is a relatively new face in Belgium with a stacked history, I was curious to hear how his season went and what cyclocross is like in Poland.

When Gil finally showed up at my house last week, I found out that his personality was perfectly in line with his opening sentence. And my cookies must have been great because this 26-year old sung like a canary. 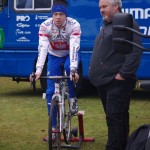 Congratulations on winning the Polish Champion jersey! How does it feel to show it in Belgium?

You feel a little bit different. I have other clothes so people don’t look at you the same as before.

It was not the first time I won the jersey, but I was happy to be the champion again.

Is cyclocross popular in Poland?

No not popular. We have very small races – maybe twenty in the season but no supporters or sponsors there. The people in the crowds are mainly racers from the other categories. Our events are spread out – not like in Belgium where they are all within a hundred kilometers. In Poland we have to drive five-hundred kilometers to have a race. Not easy. The problem is with the federation. Since cyclocross is not an Olympic sport they don’t put the money into it so it remains a side sport.

What did you do before cyclocross?

I started in road races, and a little bit cyclocross. But when I came to Belgium for the first time, I saw what cyclocross was really all about and I loved it! I see you made a major jump in your results over last year.

Jump? Maybe a step – one step forward. In previous summers I did other preparations, but this season I did more easy rides but bigger races with the profs on the road. I did them with my Baboco-Revor Team. It was hard in the beginning to races with guys like Tom Boonen where it’s very fast. The first race was incredible. I couldn’t stay in the peloton. But step by step it went better and better and then I could finish without any problems.

In other years, in the off-season I did maybe too little or too much – difficult to say. But this season I had a good preparation. And for the first time I am with a good team. This was also very important for my progression. Where in the season did you feel this progression the most?

I think last week was very good [where he placed top ten in two events, including the Superprestige Vorselaar race]. I didn’t expect it would be so good because my condition from Christmas period of racing went a little bit down. I didn’t think that I could come back to top form.

Yeah, it was strange though. I didn’t feel tired the first three laps. They were riding too slow for me even with my crash. It was a strange feeling. It might be because the course was so slippery or maybe I feel so good. I don’t know. I didn’t understand why I was passing some good riders. [chuckles]

How did it feel to race a predominantly Belgian race schedule for the first time?

It is not easy to do all the big races with the big guys, but I am in a Belgian team and we want to show the jerseys in this country…we have to do it. [chuckles] Maybe it was even a little bit better to race mostly in Belgium compared to other years because we don’t have to travel so much. Last year we would do a race Saturday in Belgium then Sunday in France or Switzerland so it was not so easy.

We do get tired from a heavy Belgian race schedule maybe not in the body but a little bit in the mind.

How did you end up on a Belgian team?

At the end of last season I went to talk to the guys at Revor. I was not so good that season, so it was not easy to find something but they gave me the chance. My contract with them is until 2012.

What are your goals for the next season?

I want to do much better next year – focus on World Cup races. Last year I hoped for top twenty in the World Cup overall and I did it. I was nineteenth. For next year I hope top fifteen but we will see if I can again make another step forward.

With your results combined with your outgoing personality it is only time before you have a supporter club here in Belgium.

[laughs] I have people coming to the races to support me, and my team is making a fan club.

I have never been to America so I will be very happy to be there – if I am selected by my country. I will be going to America at the beginning of next season to Vegas and the two races right after that for our clothing sponsor Champion System. We will sleep in Las Vegas above the casino! Is Vegas really like they say?

Crazy day and night. The architecture is beautiful. You can do everything for free.

Some things you have to pay for. But at least what happens in Vegas, stays in Vegas – or at least that is what they say… ready to test it?

[laughs with a big smile]

Next post Cyclocross Highlights from Frostbike and Stybar's New Bike