NEW WAVERLY, Texas—This past Saturday saw racers from around Texas take to the start line at the first HTFU Roubaix, a gravel race of either 36, 72 or 108 miles, presented by Kolo Promotions. Texas has seen a growth in gravel events with Bicycle Sport Shop's Holey Roller in the late winter and next month's Castell Grind, perhaps the most well known gravel event in the Lone Star state.

For its part, Kolo Promo is a known commodity in the Central Texas cyclocross scene, with equal payouts for men and women, great awards for lower category podiums and good times. Speaking to founder Bryan Voytilla, originally from the "cyclocross capitol of the world Portland, Oregon," he said that Kolo is "just a group of people that saw an opportunity to change the local racing scene. Since [we started] we've grown with dedicated volunteers into a group of racers that cant stop putting quality events on." As such, their first gravel race was a don't-miss-event for many racers and riders.

The race came about back in November when Voytilla and teammate Joey Martinez rode it on their singlespeed 'cross bikes. "[I]t was so miserable and cold that we didn't say much the whole ride.  When we were done with 1 lap, we were both toast and thought of all these reasons why it would suck to race on.  But, on the drive back to Houston we couldn't stop talking about how hard and different it was to routes we've raced in the past and we knew that we had to do it. The scenery is amazing and the roads offer a unique challenge. If we were going to do it we would have to make the race at least 100 miles and everything else came together," said Voytilla. The Sam Houston National Forest was the backdrop for the HTFU Roubaix. © Ken Lim / Cyclocross Magazine

The course is set in the Sam Houston National Forest northeast of Houston was a 60/40 split of road and gravel with two  gravel sections separated by two paved stretches. The first road portion was relatively short, taking riders from the start to the right hander that went into the forest. The first non-paved segment was just over 7 miles long with sandy pockets, short and steep loose, punchy assents and loads of shade from the warming Texas sun. The second paved stretch was the longest of the course, with rolling climbs and clearings that exposed the riders to relatively calm, but steady winds. And the final 6 mile stretch was again gravel, and while shorter than the first, featued a few more technical areas, including some river rock sections where the "road" had been "repaired." According to Voytilla, there was roughly 1,400 feet of elevation per lap.

Riders had their choice when registering for the race to take on either one, two or three laps. At 36.5 miles per lap, riders opting for the three lap raced faced a 109 mile challenge, which had been billed as 108, a depressing fact as one glanced at their Garmin as they neared the finish. Men and women toed the line together for each of the races, which went off in five minute increments.

For the 108 mile race, our own Daniel Curtin, riding for Team Yacht Club, took the field off the line and stretched things out some in a bid to make sure the first gravel section made the initial selection, which it did. Approximately 17 riders cleared the first rocky stretch with nine riders bridging up before the second gravel stretch on lap one. Across that section, the paced quickened considerably, with riders diving for any clearing they could find. By then, the group contained just riders from the men's field, which finished lap one in 1:43. Behind them, but not far off the mark at all was Curtin's teammate Jolene Holland, who rode lap one just off the leading men's time in 1:46 and was well off the front of the women's race.

The leaders rode easy through the neutral feed zone for the first of two times, some opting to stop ever so briefly for their own fueling options, others simply taking neutral bottles and shedding arm warmers and the like.

Lap two started as a respite, but on the road climb to the first gravel sector things heated up and by the time the field hit the dirt again it was crit speeds and single file as everyone tried to hang on to Scott Henry of Chicken & Waffles Racing and Scott Minard of BCR. Henry, it turns out, was getting pulled away by a ghost rider who jumped in moments earlier from the 2-lap race. The leaders mistakenly assumed he had started with the rest of the 2-lap field 5 minutes behind. Bill Quach decided to initiate a bridge up and eventually Minard and John Wilmeth bridged up to Quach and they agreed to let the eventual winner Henry sit out there because he would be alone for the last 35 miles and ultimately reeled in. He wasn't.

The carniage in the back of the field was evident as early protaganists Curtin, his teammate Corey Bounds, and Christian Newton of ATC Racing were all on the backfoot. Ten riders rode clear to the second paved stretch and on towards the second and final pass of the other gravel section and the feed zone in the start/finish area.

What happened next was by then predictable, the leaders hit the gas after the feed and it was a war of attrition in their wake. For the women's race, the final lap saw Holland bridge into the top 10 of men on the road after the last pass of the first gravel stretch, dropping the guys sitting in 11th, 12th and 13th before the last gravel pass. In the front of the men's field, Scott Henry was able to put over 20 minutes into the field aboard his Pivot Cycles Vault cyclocross bike—outfitted with road gearing, his secret weapon. 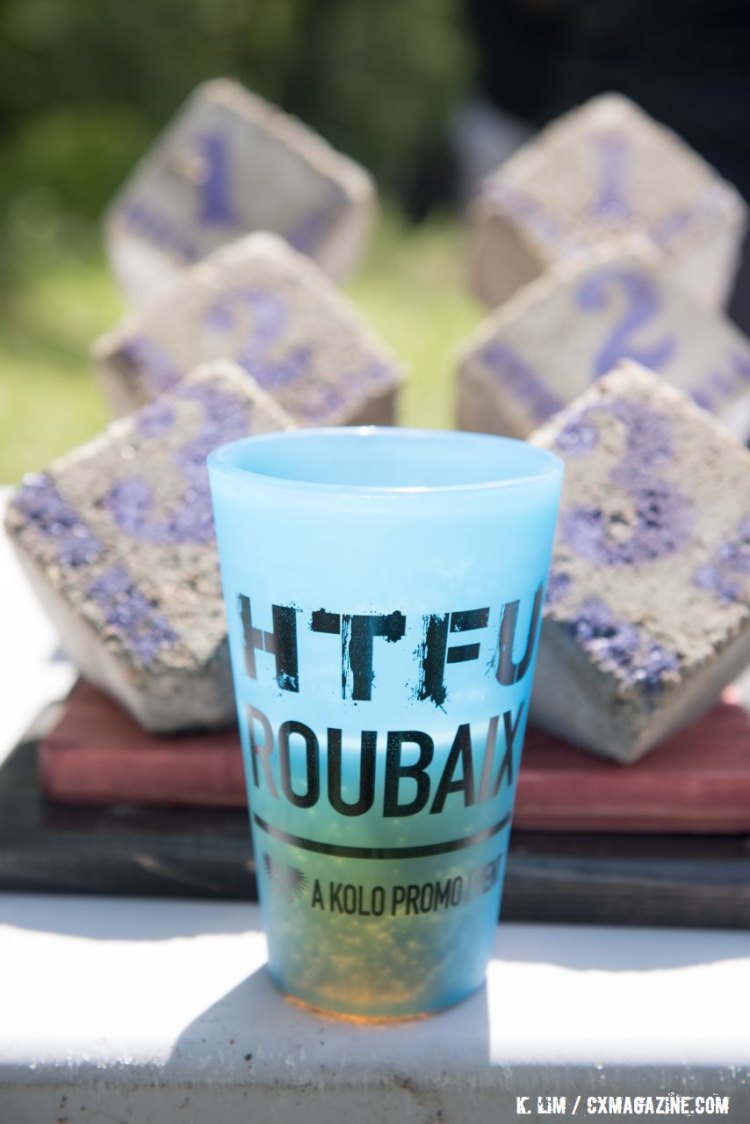 Pint glasses, complete with free beer, and free tacos greeted every rider at the finish. The trophies went to the fastest. © Ken Lim / Cyclocross Magazine

Both Holland and Henry easily took the win in their fields. The men's race saw a two up sprint for second with Bill Quach of Southern Elite/Sun & Ski Sports edging out Minard for the second podium spot. Behind Holland in the women's 108-mile race it was Brittany Parffrey of Bicycle Heaven/PVA and Holand's Team Yacht Club teammate, Karla Gendler.

After the race, Henry noted that his equipment had been an advantage when he decided to turn the screws on the riders still left at the front. And Holland too was quick to note that she was thankful for taller gearing on the primarily smooth course, having switched to a 44 tooth ring on her 1x set-up on her 'cross bike.

Kolo's HTFU Roubaix will be back next year. "We have some big plans to work with some other promotors in the gulf coast gravel market to make improvements to our race," said Voytilla after the event. "We were overwhelmed with the great support for this race's first year.  I had people come up to me and say they had 3 flats on the course and had a blast.  Equipment setup for HTFU is a bit different since there are so many elements to the race," he noted, before adding, "I think people like the challenge." They certainly seemed to.

You can see images from the race, videos of the podium from the men's and women's 108 mile race and race photos in the slideshow, below.

Have a local gravel race report? Find out how to submit your race report here. 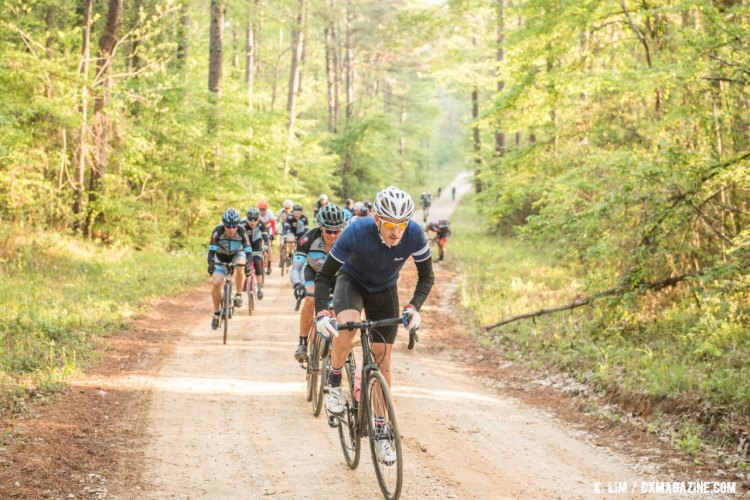 The line of riders coming through the opening section of dirt. © Ken Lim / Cyclocross Magazine