A rider focuses hard on the course. © Trish Albert/Southeasterncycling.com

PALMETTO, GEORGIA — Winter temperatures finally graced Georgia with their presence for the series finale at the Serenbe Community in Palmetto, Georgia, while the rain that held much promise on Friday only did enough to keep the dust and other types of compost down. Faster Mustache not only put on a race, but they provided a party with a roast pig and a keg of beer. Masters racers contributed to the food, and all money raised from its sale went to the Atlanta Bicycle Coalition.

The course differed from last year. The start was up the gravel road and was followed by a short jaunt through the woods. Riders did a few turns in the grass and then flew down the gravel road back into the woods. A long climb followed, half rideable and half a forced dismount. The course then went back through the grass, over the barriers, and through a few more turns before popping out at the finish line.

The Masters races have been some of the most hotly contested of the year. Bob Kuhn (HUP United) realized that he was in third place overall in the Masters 35+ and decided to race down an age group. Bob took the lead early, but Perry Thomas (New Leaf Adventures) stayed on his wheel the first several laps. Bob held on for the win, and Perry took second. In the Masters 45+, Michael Schmid (Nouveau Velo) took the holeshot followed closely by Alan Burton and Lamar Mauney, both of FFCC.  The twisty root section following the start and Michael’s rapid pace quickly separated him and Alan from the others. Lamar took lead of the chase. Michael remained on the gas, staying on the front with Alan in tow for the next six laps. On the final lap, Alan took the lead before the dirt road descent with Michael taking back control as the pair climbed into the field for the last time.  Alan began the sprint at the barriers, hanging on to take the win by less than a wheel. Lamar came in third, securing his series title.

In the Men’s Cat 4 race, Gabriel Deans won with Matt Sweeney in second. In the Juniors 15-18 Fletcher Lydick (Frasier Cycling) took first, and Corey Bryant was second. In the Juniors 14 and under, Mikey Waine (FFCC) was first. Ian Garrison (FFCC) got second. The Women’s Cat 4 was a battle between Ellison Fidler and Laura Andrews (Free Flite). Ellison has beaten Laura in their previous meetings this cyclocross season. Determined not to let Ellison get the upper hand, Laura took the early lead. However, Ellison proved a little bit stronger and took the win, and Laura held on for second. In the Men’s Cat 3, Ian Pruner (Smyrna Bicycles) won, with Chris Tavel (Loose Nuts) in second. The Women’s 1/2/3 race set a record for the 2011 season. Never before have they had more than 10 racers in every race of the season; they did this year! At several races, there were more Women’s 1/2/3 than Men’s 1/2 including the series finale. Despite suffering from a sinus infection, Kym Flynn (US Stove-Vantaggio) took off from the line. Both Colleen Paine (Kenda) and Melissa Leigh (ACC) went down in the woods section shortly after the start. Riders got spaced out, having to go around them. The chase to catch Kym was on. State Champion Shannon Greenhill (Peachtree Bikes) put in a giant effort to catch her but could never quite get close enough. Behind Shannon, the battle for third was intense as Kim Sawyer (WCP) tried to stay ahead of a surging Elizabeth Lee (FFCC). Even further back, the Augusta Cross Coalition was doing dollar bill hand ups for the midpack riders. This led to much cheering as the ladies stuffed the dollar bills in their skinsuit pockets. Kym clenched the series overall with her win, and Shannon was second.

The Men’s A was won by Thomas Turner (Jamis). The battle for second continued as it for the last several weeks between Tim Barrett (Roswell Bikes) and Doug Ollerneshaw (BMW-Litespeed). They traded places several times, each taking their turn to pull. In the final barrier section, Doug put five seconds onto Tim. He would hold it to the finish.

The Single Speed race was a contest between Michael James (Dahlonega Wheelworks) and series leader Dave Marbut (FFCC). Further back, the battle was on to see who of those riders over 21 could take the most beer hand ups or stomach a port hand up. Quite a few people offered beer hand ups, which made the rider’s job easy. One rider, who wished to remain anonymous, said the he was able to get a beer hand up every lap except the last one. Michael would hold on for the win with Dave taking second.

The 2011 Series may be over, but planning is already underway for 2012. The Georgia Cross Series would like to congratulate all of the series overall winners! Special thanks to all of the race promoters and their volunteers for making the races happen. Thanks to the racers for coming out and supporting the series! Thanks as well to the Board of Directors for another great series!

Next post Cyclocross Gift Ideas and Reviews: Get a (Better) Grip with New Brake Pads and Bar Tape 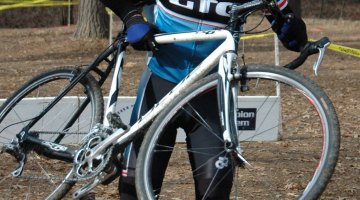 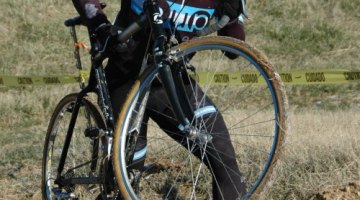