Cant Doubles Up on the Weekend at Superprestige Hoogstraten Despite Pavement Crash: Race Report, Full Results Sanne Cant, back to her old form, but a late crash might impact the next few weeks. © Bart Hazen

HOOGSTRATEN – Sanne Cant came across the finish line and quickly grabbed her shoulder in pain. She had won the Women’s Elite Race of Sunday’s Superprestige, which came after a big crash on the pavement late in the race while she was off the front alone. Helen Wyman lead the pack of chasers across the finish line for second, while Jolien Verschueren took third.

The course at this event appears more like a bog in some areas, and while the mud can be power-draining at times, the riders have to be careful as the mud turns slick as tires make the transition to pavement.

As one of the fastest starters in cyclocross, Wyman was able to leap off the starting grid first and take the holeshot. Instead of creating a gap and seeing how far she could get ahead of the other riders in the early goings, however, she appeared as if she was backing off a bit, and allowing other riders to set a pace. 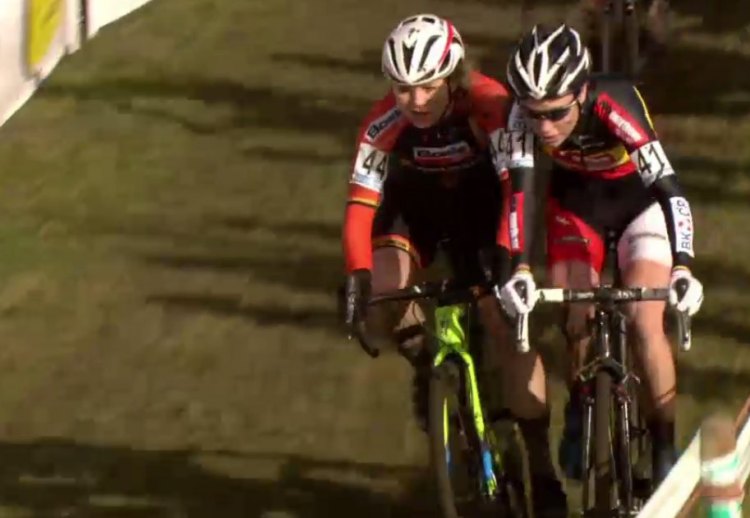 Cant didn’t need more of an invitation than that, and after bumping shoulders with Sanne van Paasen, chased down Wyman and decided to dictate the speed through the heavy mud of the course. Helen Wyman rides the ditch while others run, but it wasn’t necessarily faster.

Ellen van Loy took charge as the primary chaser of Cant, with Wyman and Verschueren following in suit. The chasers all volleyed for spots as the race pressed on, but it appeared as if Cant was going to cleanly pull away with this race as she had done the day before in the BPost series. Van Loy leads the chasers through the sand. Photo taken from Vier footage

On the pavement of the final lap, however, Cant took a turn too tightly, and snagged herself on the straw fencing that lined the inside of the course. This, combined with her mud-slick tires, caused her to crash hard.

“I was soon on the ground and hurt my left shoulder,” Cant told Vier after her race. I was afraid that Wyman would catch me, but the gap was large enough for me to keep my lead [through the final lap.” She was able to finish with her hands in the air, but she quickly reached back to her shoulder.

Her reason to fear Wyman was not unfounded. The British National Champion had taken back the lead of the chasing group from Van Loy and was hoping she could reclaim the lead from Cant. But the World Championship runner-up still had a large enough gap to secure the win, although Wyman was able to narrow the lead to 14 seconds by the time she crossed the finish line in second. Verschueren took third a half-minute behind Wyman. Van Loy arrived in for fourth nearly two minutes behind the leader.

Hannah Payton finished ninth, almost six minutes back, and Christine Vardaros was the last rider pulled from the race, and was the lead American in 15th place. Elle Anderson, who is having a rough late season, finished in 20th place.