The Beer Gazelle gets a sand pit hand-up © Lisa Beres

Dan Bernards (aka Beer Gazelle – Built for Speed, Optimized for Beer) just wrapped up his first ‘cross season with the February 13th CX Santa Rosa series finale.  It was the feeling of community that originally brought him into the fold. Although his local race scene includes the Santa Rosa and Livermore series in California, it was his first race, a Cross Crusade in Oregon, that stoked his fire. “Mostly, I love the people like me who know they aren’t going to place that well in the race but get out there, grind it out and compete regardless.”

All I know about my cyclocross season finale at Santa Rosa is that I was a winner. Handups aside, this race was easily my best performance, finishing out of the lower 30% of racers for the first time ever. The course itself was very flat, but included six barriers, a sand pit and a bunnyhop-able set of curbs. I think my technique through the barriers definitely helped. For the C’s race, the course was sloppier than later in the day as things seemed to dry out and pack down. I almost had some excitement on the last lap as another racer tried to catch me, but he slid out trying to accelerate out of a corner, so I managed to hold my finishing position.

I was not the only winner of the day. Watching the Skuut dollar grab unfurl in front of my eyes was true magic. The afternoon was packed with barbecuing, dollar grabs and beer hand ups, which culminated in the Men’s B Masters race.

Our personal champ was Jeff Ochs (riding for Paul Comp), who made it over from Chico, CA. It takes a special rider to take hand ups in the double digits during the race. Such excellence needs to be acknowledged (and envied).

I don’t know about you, but I can’t wait for the return of cyclocross this fall.

How about a kicking highlight video from the CX Santa Rosa series to cap things off? (Do I hear Rush!?)

Read more from Dan on his Beer Gazelle blog page.

Next post Two for One? Compton Seeks Title Sponsor, Pledges Double Exposure by Racing with Men 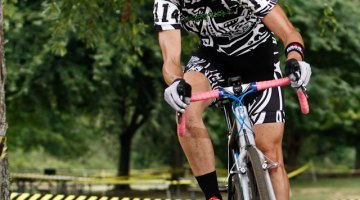