The great marine state of … Ohio? … has its sharks and perhaps more aptly, southern Florida has its gators.

Last weekend, the Great Gator Gravel Grinder (4G, for short) took place on the gravel roads between Homestead and the Everglades in southern Florida. Organizers dub it “the southernmost un-southern gravel grinder,” since the Miami area is not necessarily like much of the rest of the South.

This year’s event marked the sixth running of the 4G race. Like many other gravel events, the race started as a formal way of riding roads that were already well-traveled.

“I had already been riding all this stuff out there for a long time,” race director Gary Mendenhall said. “I had this idea, I should do a gravel ride down here. I mean, we’ve got gravel. I started talking about it for about two years, I kind of mulled over the idea. I had the name of the event all ready and worked out, and then finally a few friends kept pushing me, saying, just shut up and do it. So I just shut up and do it.” 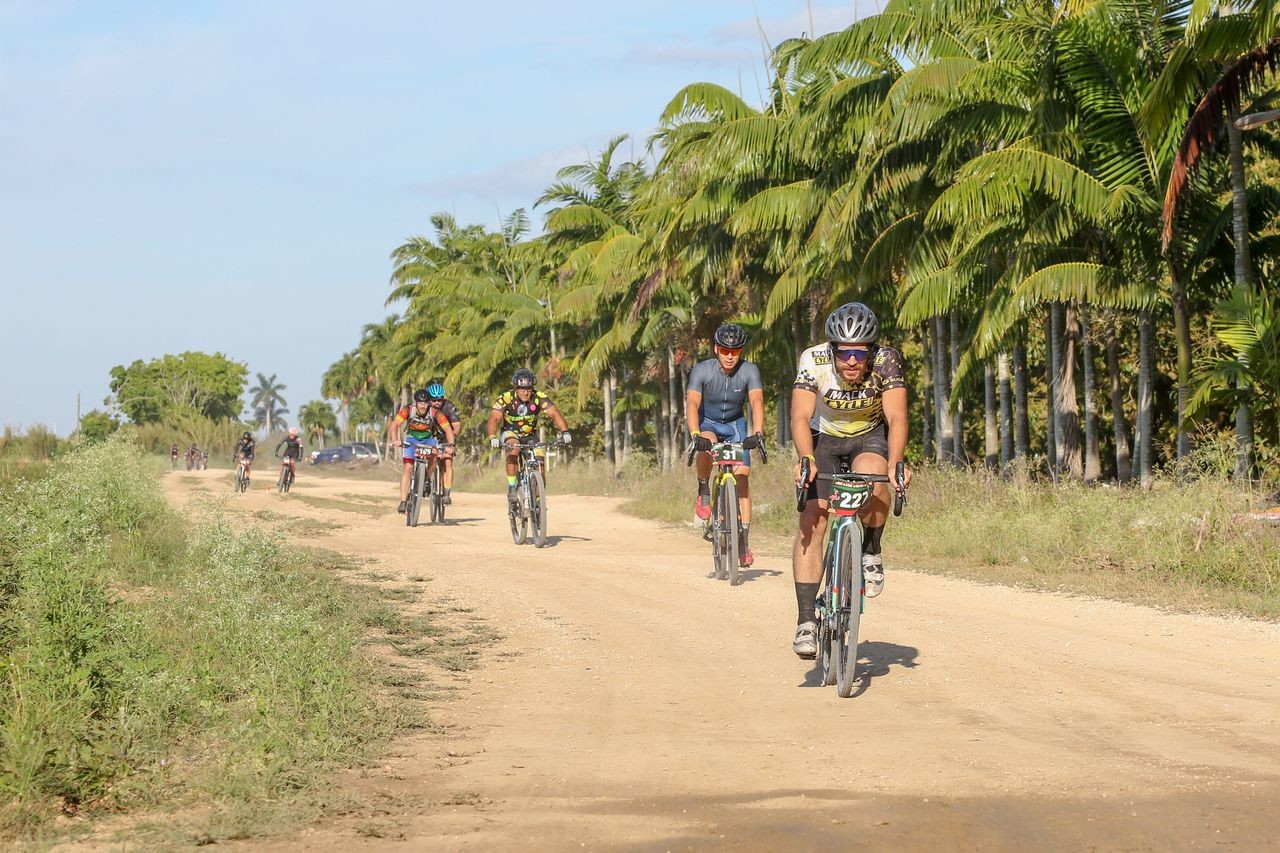 Southern Florida is not necessarily known as a gravel hotbed, but according to Mendenhall, there is a lot of gravel to be ridden in the area.

This year’s race offered distances of 62 and 32 miles, and organizers also put together a guided 10-mile intro to gravel ride for the gravel curious. For each of the routes, there were plenty of roads and paths to choose from.

“It’s a mixture of different roadways out there,” he said. We’ve got canal systems in Florida, and along those canals are access roads. They’re all gravel. Years ago, water management also had access roads that are either broken up pavement or dirt roads out in the middle of the Everglades. I take people onto farm fields and some of the rural dirt roads. It’s a wide variety of terrain.”

“The way I set the course up is you’re never on one section of terrain for two or three miles before I dump you into something else.” Iceland’s Lauf Forks has continued to build its presence in the U.S. gravel scene, and it helped sponsor the 4G event. Lauf employee Olafur Thorarensen joined Mendenhall for a pre-race course inspection and helped put the southern Florida setting in perspective.

“We went driving through some farm fields and a couple other places, and he had done a couple of gravel rides in the States already, and he was like, ‘I’ve seen more gravel on this ride than all the other rides I’ve done here,'” Mendenhall said.

On the race website, 4G organizers recommend tires that are a minimum of 40mm wide. I’ve gotten away with running 33mm tires for a gravel race before, so 40mm, that must mean things are super chunky, right? Well, kind of.

This year’s 4G gravel event offered more than just the long distances for the weekend’s participants.

“I like my ride to be all-inclusive,” Mendenhall said. “I like to let the people who want to race, race, but I also want people to come out and ride it and challenge themselves. You also want to get people out there who are beginners. We like to have the short distance so people don’t feel left out.”

The 4G race was based out of Homestead’s Miami Brewing Company. Well, it is sort of in Homestead. The brewery is located on the outskirts of town with gravel roads leading right to the front door.

A central part of Sunday’s festivities was the 10-ish mile beginner’s ride that organizers first offered in 2018. The idea was inspired by some of the other popular events on the gravel calendar.

“A lot of events can be for a certain type of person, but gravel, all the other events have shorter distances. Look at Land Run and what they do at DK, they’re all-inclusive for almost every level of cyclist,” Mendenhall said.

“That’s what I tried to do here. Include everybody in it. We probably had about 25 riders who did the beginner 10-mile ride, which was a really good response.” The race offers something for riders of all ages and abilities. 2019 Great Gator Gravel Grinder. © Ross Lukoff

Another unique offering was a Saturday night night ride into the Everglades. About a dozen riders showed up for the quiet, dark 25-mile trip into the swamp.

“Doing night rides out in the Everglades is a blast,” Mendenhall said. “We’ve found pythons on some of our night rides. We go out there and see python hunters out at night.”

Finally, each year, the race features a touching emotional note in honor of a member of the region’s gravel community who was taken too soon.

One of the folks who pushed Mendenhall to host the race was Meagan Wentworth. A few days before the first-ever 4G race, Wentworth passed away after a several-year battle with a rare form of cancer.

Just a few days before Wentworth passed, Mendenhall went to her house and offered to take donations at the race to help her with her medical bills. Wentworth declined, but offered up Radio Lollipop as a non-profit she frequently volunteered as a worthy way of honoring her memory.

Mendenhall described the organization, “Radio Lollipop is a non-profit that has radio stations in hospitals around the world. One of them is here in Miami and Nicklaus Children’s Hospital. Basically what they do is entertain the kids while they’re in the hospital. They play music, they have games, kids can go on the radio and participate and play games.”

Each year and each year that the 4G event will be held, organizers take donations in Wentworth’s name for the organization.

If you are like me, you likely came here for the gators. I mean, the Great Gator Gravel Grinder better have plenty of gators, right?

Although gators festoon the name and race promo materials, the prizes are more in keeping with the southernmost gravel grinder thing.

“Some of the places you’re riding through are very rural and very out in the middle of nowhere,” Mendenhall said. “We’ll ride out of and find piles of garbage people dumped, and we’ll find stuff out there and create trophies.”

A few years ago it was sandblasted mason jars filled with gravel and bullets. Last year it was flasks, this year growlers filled with Miami Brewing Company beer.

And what about gator encounters? Again, not so much.

“Unless you’re completely stupid and jump into a canal, gators are not going to bother you. Unless you mess with them, they don’t want anything to do with you. They’re usually on the edges of the canals, which are down from the road. If there is one in the canal that sees you coming, it usually just goes away,” Mendenhall said.

“Gators are fairly lazy. It takes a lot of energy for them to do anything, so if they don’t have to move, they don’t want to move.”

The 2019 Great Gator Gravel Grinder took place on Sunday. The day was near perfect, with temperatures starting in the 70s and staying there for most of the day.

Not surprisingly, the 4G routes are flat as a board, and a stiff wind did pick up that made the latter half of the race a grind.

Full race results for the 62-mile race are below.

Photos are available from Ross Lukoff and full results for the 62 and 32-miles races are available here. There is also a video that gives a little flavor of what the race is like.