As sports fans, we watch sporting events for any number of reasons. Fun, diversion, camaraderie, weird obsessions, whatever it might be.

One of those reasons for many is the hope that if we watch enough events, we will get to witness something special. It does not happen often, but every once in a while a great game or race comes along that stands out as an event we will remember not just next week but next year.

So what makes a cyclocross race achieve greatness? That is a good question.

We remember the examples above because the stakes were so high. Great races can happen locally on any given Saturday or Sunday, but true greatness is usually reserved for those races when the most prestigious titles are on the line.

This calendar year, there have been a number of cyclocross races that were nothing short of barn burners. Today, we look back at six classic races that have a good chance of being remembered years from now.

Use the next button to read about each.

Just three weeks later, the 2018 World Championships in Valkenburg-Limburg saw another duel between an athlete looking to cement her legacy as one of the sport’s greats and a living legend hoping to get the one title that has eluded her through 14 years of greatness.

Sanne Cant won her first World Championship in Bieles after a memorable last-lap duel against Marianne Vos. She had won 15 races heading into the 2018 World Championships but was still looking for the validation that comes with a second title.

She had the added motivation of being written off by many in the European press since the Valkenburg course seemingly favors riders with a mountain bike background.

Compton had just won her 14th-straight U.S. National Championship, she has won the World Cup overall, she had finished second at Worlds three times. The one thing Compton has not done is win a world championship. Sanne Cant and Katie Compton had a number of battles during the 2017/18 season. 2017 World Cup Zolder. © B. Hazen / Cyclocross Magazine

Compton has said many times she has come to peace with not ever winning Worlds, but when Compton caught Cant with two to go, literally every U.S. cyclocross fan awake that Saturday morning was urging Compton on to a win through their television or computer screen.

Although the Elite Women’s field in Europe had an anything-can-happen feel during the 2017/18 season, Cant and Compton were the two most consistent performers from October on. Compton uprooted and moved to Belgium to race a full European campaign starting in early October. She won five European races and had a number of battles against Cant.

That it would happen again at Worlds was the perfect end to a special season for both women.

To a person, every athlete who raced at Valkenburg Worlds said it was the single hardest race they had ever done. The hilly course is challenging when it is dry, but heavy rains turned the track into a muddy slog. In some spots, the mud was over six inches deep. 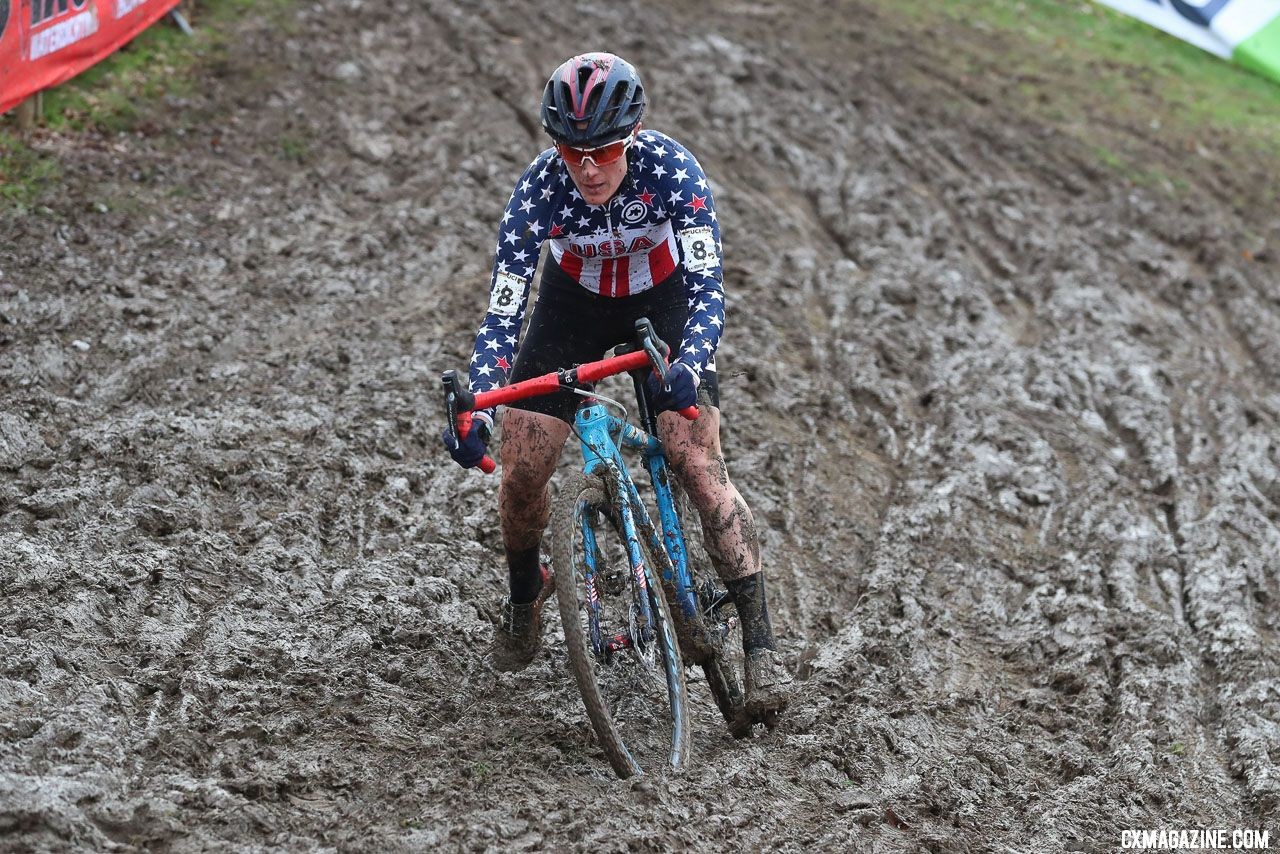 It was against that backdrop that the race took place. Cant got off to a fast start, and after one lap, she led Compton and Christine Majerus by over 10 seconds. In the second lap, Compton worked her way free of Majerus and caught Cant at the end of the lap.

Midway through the race, it was Cant v. Compton with everything on the line. Cant and Compton got to the front for a battle with everything on the line. Elite Women, 2018 UCI Cyclocross World Championships, Valkenburg-Limburg, The Netherlands. © Gavin Gould / Cyclocross Magazine

In the third lap, Compton almost got a golden opportunity. Cant nearly lost her footing at the top of the wall run-up and came very close to toppling backward on the steep, muddy climb. No one wishes ill on another rider, but it was almost as if the ’cross gods helped Cant get her footing just to spite Compton.

Still, Katie Fn Compton entered the last lap of the World Championships with an eight-second lead. At the same time, Sanne Cant is great because of her last-lap skills. The elusive jersey would not come easy for Compton. 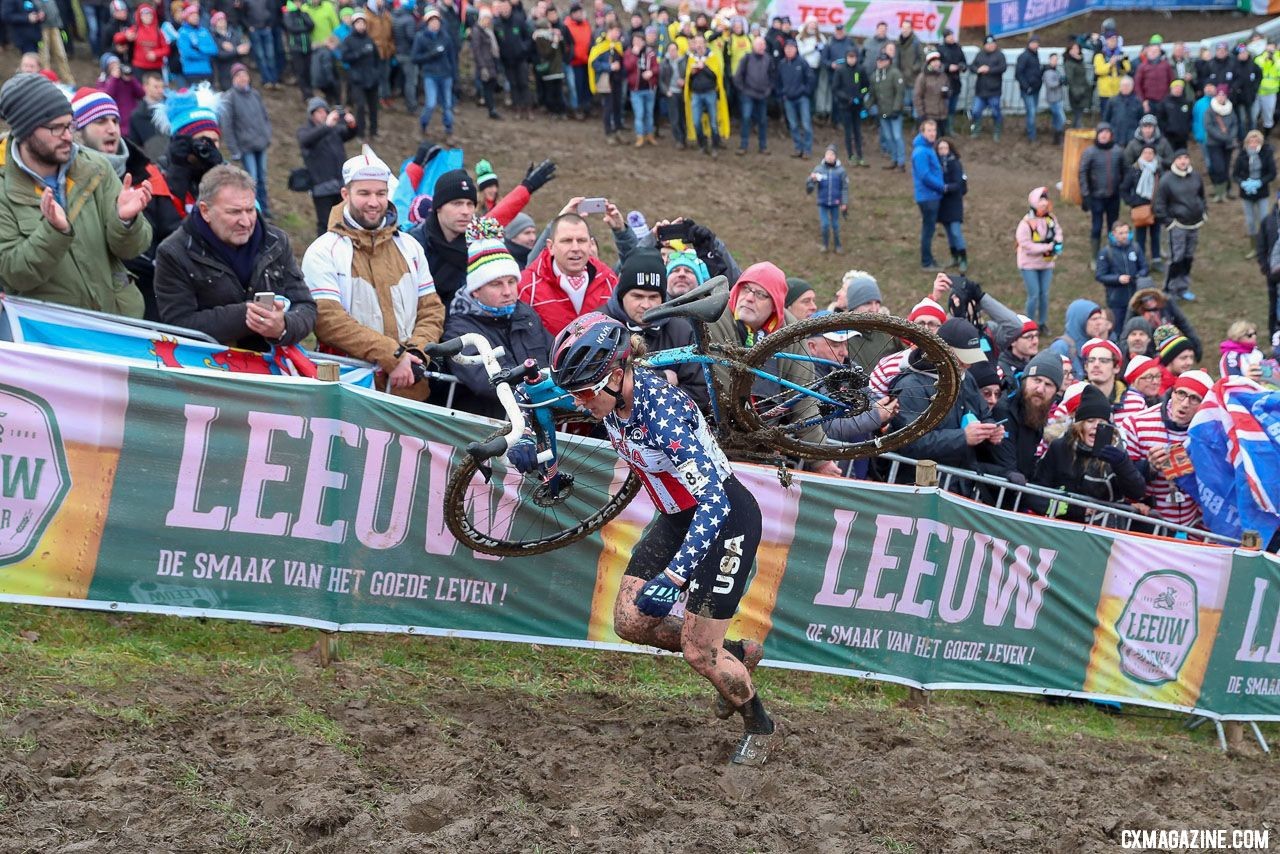 Pit box choice is not necessarily something cyclocross fans think about much, but at the 2018 World Championships, it suddenly meant a lot. Compton’s spot for Pit 1 was at the far end of the pit. She lost traction entering the pit and had to run the entire length on foot. Cant, on the other hand, was near the entrance. One pit box choice later, Compton’s lead was gone.

Compton is also well-known for her bike-handling on technical descents—see: 2018 Louisville Nationals—but at Valkenburg, the thick, muddy switchback descent got the best of her. Compton had to run the section, and all of a sudden, Cant had a big lead.

Cant was the best female cyclocross racer for much of the season and on that Saturday, she secured a well-earned second world championship. Cant would likely be considered one of the sport’s greats even if she had retired with one rainbow jersey, but winning a second certainly added legitimacy to an already impressive career. For Compton, it was a fourth Worlds silver and another near-miss. As always, Compton took her finish in stride knowing that she gave everything she had on the hillside in Valkenburg.

For more from the race, read our race report and our post-Worlds Q and Fn A with Compton about the race and pretty much everything else.

Next post Brand Plays Catch Me If You Can, Wins Azencross Loenhout in Exciting Fashion - Report, Results

Previous post Will There Be a RenoCross in 2019? We Spoke with Race Director Coby Rowe About the Race's Future