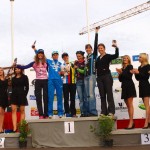 Vardaros may not have won the gold, but she was thankful nonetheless. “I almost never get sick, so I was really unlucky to wake up that morning with the worst kind of cold – congested lungs and flat legs. Jonas [Bruffaerts-her husband] had to lure me out of bed with the promise of hot cocoa served in bed after the race. I am very lucky to see the podium.”

The race started off at a crawl’s pace for the first few kilometers until Garus and Lazzaro attacked. Having no jump in her legs, Vardaros was forced to bridge the gap at her own pace,

with one rider in tow. Once the gap was closed, the group slowed enough for one more to join. For the rest of the race, the riders worked nicely to keep the pace high. It wasn’t until three kilometers from the end that the small group was blown apart. By the top of the “Eikenmolenberg”– a 200m, 12% climb that follows a long 5% drag – sizable gaps formed between the five riders. At the bottom of the descent, the top three were just together, with Vardaros tailing in third position. The tricky turns leading to the finishing straight should have determined the finishing order to remain with Lazzaro in the lead. But on the last turn, she went wide, allowing for Garus to slip by for the win. The first words out of Garus’ mouth just after crossing the line was naturally, “I don’t believe it.”

Next year the event will be held in Gabicce Mare, Italy, where Vardaros hopes to come home with the jersey. With a healthy body and a bit of luck, anything can happen.